The debut of Pro Evolution Soccer 2015 on the new generation of consoles took its time getting here. Konami has not only let FIFA 14 reign alone during an entire year on Xbox One and PS4, but they also gave away a two month headstart to FIFA 15. Alas, the wait was worth it. The game has its flaws, and the absence of some licenses remain a troublesome setback, but at least the gameplay is in the best shape it has been in years.

This very positive performance from PES is not entirely surprising. During Gamescom, Konami's simulator showed up in great form (it even won the award for best sports game of the show), and that good impression was later reinforced by preview and demo versions. Konami's motto was always the same: "it's what happens on the pitch that matters" with the focus clearly on gameplay. During the last few years however, PES failed to live up to that old premise. That is until now.

The great strength of PES is the sensation that the gameplay conveys. The game has fantastic pace, with appropriate movements of the players and excellent response times between your controller input and what happens on the screen. It is still a simulation, but with several arcade elements that fit it well. Many gameplay elements work properly, but there are still aspects to improve. Some moments are frustrating, like when players fail to pass a ball when it was clearly in his reach, or when a tackle doesn't work as intended. Sometimes the player misses an interception he should have caught, causing a foul, which is particularly frustrating when it results on a penalty. It's not enough to ruin the experience, but it's the kind of details that should be corrected in a future update.

When we play Pro Evolution Soccer 2015, there is no big new feature that overshadows that rest of the game with the exception being the goalkeepers. There is no new dribbling system, no new ball physics. What's there is balanced and polished gameplay, that translates to a very pleasant gaming experience, more so than any other PES in recent years. As for the goalkeepers, they are now better than previous versions of the game showcased, with great reactions. There are small elements to improve in terms of their behaviour, but overall it's an excellent debut for this new goalkeeper system

There were also some curiosity to see the the graphical jump since the last generation, but it is not as obvious as one might have hoped for. The game is visually good looking, but it's nothing that signifies a generational leap, far from it. It should also be noted that the quality of the faces varies greatly. While some of the better known players are almost identical to their real-life counterpart, others are not only completely unrecognisable, but they also lack detail. The celebrations also were disappointing, mainly because they seem a incoherent collage of different sequences.

This is the curse of PES, the finer details outside of the actual game, but on the pitch, with the controller, almost everything works fine. The player animations are superb - fluid and realistic - and surprisingly, even the collisions are working as intended. Konami clearly did their homework.

Outside the pitch, there are several flaws and disappointing features. There is only 14 stadiums, for example, and that is a tremendous drop when compared to the previous edition, let alone FIFA 15. In terms of championships, there are several. The major leagues of Europe and South America are represented, and leagues like France, Spain and Italy are fully licensed. The big disappointment is the Premier League, where only Manchester United is licensed. The German football also has a mix of licensed and unlicensed clubs. At least it still includes the licenses for Champions League, Europa League and Copa Libertadores.

One element that disappointed us, that we did not expect, was the team management menus, that have grown more confusing than ever. It's nothing too serious, but it is a component of the game that Konami had already solved in the past, and inexplicably worsened for the new edition. As the interface as a whole, it seems outdated and should be completely reworked. These are not serious flaws, but put together ends up bringing down the overall game experience.

As for modes, most follow last year's model, but there is a big newcomer - My Club. This mode is clearly Konami's answer to FIFA's Ultimate Team (we only wonder why it took Konami so long). This mode does not work based on cards, but agents, who will present options in terms of players and coaches you can get. Like Ultimate Team, you must create a good team spirit, even in terms of tactics. If the coach prefers a 4-4-2 tactics, but your players prefer 4-3-3, for example, you will have problems. There seems to be some potential, but there's still a lot of room for improvements.

While FIFA 15 had a performance below what would we expected, PES 2015 has improved, and in our opinion it is the best football game for 2014. But that's only true as far as the gameplay goes, because PES 2015 still has many areas to improve in terms of structure and off the pitch features. That said, if you are unhappy with FIFA 15 or are a big fan of PES, the 2015 edition definitely deserves your full attention.

Advertisements
Gamereactor UK
+
Fantastic feeling of the gameplay. Impressive animations. Great new goalkeepers system.
-
Althought the animations are great, visually it's a bit disappointing. Very few stadiums. Interface and tactics are somewhat dated.
is our network score. What's yours? The network score is the average of every country's score 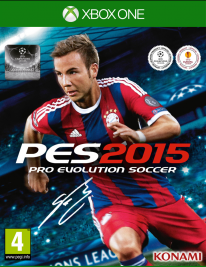