This is PES 2015 preview... but from the perspective of a FIFA fan. Usually, I try not to publish articles with such a personal perspective, but forgive me this small exception.

My relationship with Pro Evolution Soccer started years ago. It all began on SNES, passed on to the N64, and it blossomed on the earlier PlayStation platforms. However, like many other players, in the last generation I crossed the great console divide and now I play my football with EA Sports and their FIFA franchise.

It's not that PES was bad necessarily, but FIFA has improved so much over the years until, it was hard to ignore, and eventually it took over. Thus, it is difficult for me to classify or evaluate PES 2015 compared to previous, recent editions of the game. Do not worry however, when the final review is written it'll be by a PES specialist. But for now, I would like to share with you my impressions of PES 2015 ... as coming from a FIFA fan.

The delay of the PES demo was a bad day for PES fans, but happily, I had the opportunity to play several matches during a special hands-on demo of the game (which included countries, instead of clubs) at a recent event. (You can still play the demo should you wish, head here for more details.)

In recent years the transition when jumping between FIFA to PES has been somewhat difficult for me, weird even. This wasn't the case this time around. Don't be alarmed: PES didn't become a clone of FIFA overnight, but when playing PES I simply tried to play football, and football's exactly what I got.

Like many of you, I don't know how it compares with PES 2014, but this version of PES 2015 for PS4 gave me the best experience I have had with the series in several years. I loved the way the passing game worked, responding well to the indicated direction and strength placed on each pass. Through balls seemed to work particularly well (although sometimes, perhaps they were a little too effective). It's a situation that requires further consideration when we get our hands on the final version, as it may create some imbalance... but even so, the passing seemed to me considerably better than how I remembered it.

Better still was the dribbling. The animations of players controlling the ball are fantastic, with very realistic reactions. The ball felt a lot more natural, and less attached to the players. I also liked the button to hold the ball. With R2 you can start a series of special skill moves, but it is also possible to protect the ball while your player tries to keep it away from their opponent. This action was perfect for holding up play, breaking the pace of the game, and waiting for the other players to move up in support.

This brings me to another aspect of PES 2015 - the artificial intelligence. The movement of AI-controlled players looked extremely intuitive and natural, looking for spaces to open up and opportunities to pass. But this applies to the entire field - not just strikers running forward from the back. PES 2015 allowed me to play a team game, and I appreciated it for that.

The defence also seems to have been given more effective marking thanks to the improved artificial intelligence. Our only major concern relates to the aforementioned through balls, with the defence apparently pausing and thus allowing their man to run through and pick up the ball in dangerous positions; as mentioned above, this is something that we will need to confirm in the final version of the game, when we've played more matches.

I also liked the pressure brought by the 'second player', while trying to cut out passes with the player I was actually controlling. I also noticed that the game is more demanding in the timing needed to tackle an opponent. You can press X to try and close in on the player, but your second touch to try and go for the ball will have to be more precise.

Other actions, such as crosses and shots, felt great. Although both were being assisted by the AI controls, it offered a good feeling (or, at least, an illusion) of control. That said, they also had a realistic dose of unpredictability and error. Shots at goal and crossing the ball always felt satisfactory, regardless of the outcome, whether hitting the target or blazing over the bar.

A further word on the goalkeepers, who seem to have been reworked significantly by Konami. In the past I know that there were several problems with PES's goalkeepers, but what I experienced in the games played was, simply put, realistic behaviour. All the goals came naturally, and never from some idiotic decision made by the keeper.

Overall, this demo of PES 2015 impressed me, but there are some flaws that I should point out. The most obvious is in the visual department. The game is beautiful, as the new generation allows Konami to squeeze more from the Fox Engine (the same engine used for Metal Gear Solid V), but in a similar fashion to what happens with FIFA 15, PES 2015 looks more like a super version of the PS3 edition rather than a proper new-gen game (which is strange seeing as they skipped a new-gen version last year). Both EA and Konami will have to improve this side of the game in the coming years.

It is also worth mentioning that the menus still look like they came from the PS2 era. This is something that could change significantly by the time we get the final version of the game, but I didn't like the menus as they were in the demo.

I really enjoyed myself during my first experience with PES 2015. I tried to play real football, passing the ball around, containing the midfield, trying to look for opportunities to cross the ball or destroy the opposition's back line with a precise, defence-splitting pass. I haven't had this much fun with Pro Evolution Soccer for a long time, and I am eager to learn the nuances of the game, to try the manual systems and test other types of tactics. Now, will this be enough for me convert back? It's too early to say, but you can be sure that for the first time in a long time, I am willing to give a new Pro Evolution Soccer title a genuine opportunity to win me back. 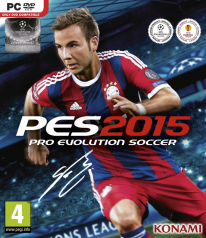