Pro Evolution Soccer was long considered the best in video game footballing. Largely thanks to a polished and dynamic game engine, that recreated the beautiful game in a believable and seemingly real manner. The last few years has been harder for Konami's series as FIFA has sailed up as the dominant force of the genre. FIFA took what was best in Konami's series, developed their own stuff, added great presentation and licenses and took the lead without having to worry too much about Pro Evolution Soccer as the series hit a slump as it transitioned from Playstation 2 to the new generation of consoles. Konami has taken this to heart, and Pro Evolution Soccer 2011 brings major and drastic changes with it.

What makes these changes so drastic? Veterans of Pro Evo will hardly recognise the game from the first touch, thanks to a totally renovated passing system. And with veterans, I'm talking about some of the best players in the world that I meant during Konami's annual world championship that took place in Spain. The passing system requires steady hands on the controller, and while this may seem inaccessible to some, the satisfaction you feel once you've mastered it is much greater.

After clumsily putting the ball in the stands, and fumbling it over the sidelines hundreds of times, the mechanics start to become intuitive. You have the freedom to put the ball into any area of the pitch with a precision that bests any other football game. When you've fully mastered it and start sending perfectly measured through balls to your wingers it's the most immersive and believable football you can experience in a video game.

The pace is well balanced and there is something about the scale that feels right in Pro Evolution Soccer 2011. No other football game gives you that authentic feeling of crashing the ball into the net from 25 yards out. It's truly a great feeling. The game is packed full of new animations, and the new dribbling system works wonderfully well. You can now perform a whole range of dribbles with the right analogue stick, but it's the little touches, without the need to press a button, that makes dribbling interesting. Little feints with the body, the balance and the distance to the ball makes all the difference. It may not look all that spectacular, but it raises the gameplay to new heights.

The game looks a bit more beautiful than previous iteration, and the lighting has most notably been improved. It may not be as colourful or full of flair as FIFA, but it has more of a photo realistic tone. The menus have been given a nice makeover and the load times are short, but other than that things are more or less the same as last year. We get to play around with tools where we can create players and arenas that can be shared with friends, and you will unlock more items to use as you play the game.

The career mode feels a bit outdated, and Konami cannot be said to hold our hands through that experience. There is little to indicate what you're doing well and not so well during a game, which can be frustrating. You don't have the option of telling team mates to pass the ball towards you, and if you're put on the bench you simply have to watch the game from the sideline. These things may increase the realism, and perhaps it always for a better pace, but it doesn't feel user friendly. It should of course be noted that the career mode is something that you should play for months, and for the purpose of this review I barely scratched the surface.

Pro Evolution Soccer 2011 is a glimmering game of football that delivers the most authentic football experience ever. The developers have made a wise decision in making the passing more manual, and once you have learned to master it, it will be hard to go back to other football games. Even if it doesn't beat the presentation and career mode found in FIFA 11, it still offers the most believable and realistic experience available. In my opinion that is what's most important.

REVIEW. Written by Kristian Nymoen (Gamereactor Norway) on the 1st of November 2010 at 14

Kristian has been playing Pro Evolution Soccer 2011 until his fingers were bleeding. Can Konami compete with EA Sports?

Images and a trailer released 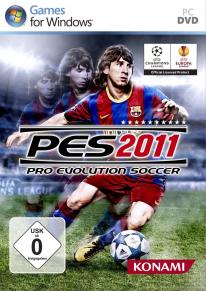