Bandai Namco just announced the upcoming title Power Ranger Super Megaforce for Nintendo 3DS. Based on the TV series by the same name, players will now get to play as their favourite character and beat up aliens. The press release states:

"In this new game, fans will be able to play as their favorite Super Megaforce Rangers in addition to the Legendary Red Power Rangers and the iconic Mighty Morphin Power Rangers. Players will also engage in epic Zord battles to conquer the colossal monsters that threaten humankind."

Power Rangers Super Megaforce will hit the stores this fall.

Based on the TV series of the same name. 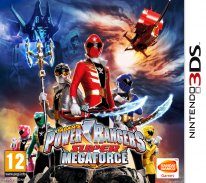