As a lover of historical and empire building games, I was initially pretty excited about Port Royale 4. The game is set in the Caribbean of the late 16th and 17th centuries, back when the major colonial powers of the time were fighting each other and numerous pirates over control of the lucrative commodities the West Indies had to offer. I admit I haven't played the other games in the series, the last of which (Port Royale 3) came out in 2012. As it turned out, Port Royale is a lot more focused on trade than I anticipated, with combat and conquest playing secondary roles in terms of importance. So how do these elements work together, and do I like the end result?

Micromanaging your trade is, without doubt, the core gameplay element in Port Royale 4. In fact, Gaming Minds Studios refers to it as a trading simulation game. Most of the time, you're scrolling along the game map to find your cities and ships, looking for a profit. The huge game map spans the entire Caribbean area, including the Gulf of Mexico, delineated by Florida to the North and Venezuela to the Southeast. In contrast to earlier games in the series, the campaign map is entirely in 3D and you're able to zoom in and out of your towns and cities in order to construct new buildings. The game map looks pretty good in my opinion, with jungles and cosy-looking houses observable on land and a clear difference between bright, shallow waters and the deep seas. There are plenty of nice details, such as people walking around in the towns, weather effects, and a day-and-night cycle. The accompanying background music is decent enough, too.

There are four playable nations in the game, each with four different characters who emphasise either trade, construction or piracy. The Spanish are the most established power in the region. They start with most of South and Central America under their control. England on the other hand is one of the newcomers and will challenge Spanish dominance and their island possessions. The French are based around the Louisiana area (named after Louis XIV, after all) and are also looking to eat away at the pie of Spanish territories. Lastly, the dominant power of the time was the Dutch Republic. Being Dutch myself, I would've liked to have started playing as the Netherlands right away, but annoyingly you're required to win a campaign as the Spanish first. Nevertheless, I think Port Royale 4 manages to blend the historical situation nicely, with my Spanish campaign being mostly about growing the Spanish cities and defending against attacks from the other nations, for example.

The main element in the game is trading. Every town produces certain goods, such as grain, luxury items, cocoa, cotton or rum. At the same time, they will structurally lack other goods, which are then more valuable in this particular town. As a trading sim, Port Royale 4 revolves around building ships and buying goods at a favourable price in one town, and selling your goods somewhere else where prices are high. The game includes 18 types of historical ships, which can be grouped into convoys for increased cargo loads and protection. Every town has a convenient overview of goods and prices, including green or red bars indicating a commodity's availability and price level. Profitable sales provide an income in gold. Gold allows you to construct more ships, to buy access to more towns to trade with, and to develop your home port to produce more goods.

Despite a fairly good tutorial, it took me some time to get a feeling for the in-game economy. Manually sailing from one town to the other and buying and selling goods went well after a while, but luckily you're also able to set up automatic trade routes. This requires you to pick a route around the towns to visit and the goods to buy or sell automatically at the best prices. Unfortunately, I felt the manual buying and selling and the building of trade routes to be a bit of a chore after a couple of hours. I was constantly checking between towns, adjusting trade routes and eyeing prices. It reminded me of an actual job at some point. I can understand how this attracts players to the series who like a trading-focus, but this certainly isn't everyone's cup of tea.

Luckily, developer Gaming Minds Studios has added other elements to keep things interesting for a more general audience. Every nation has a Viceroy who's constantly guiding your gameplay with assignments, such as spreading colonists around or constructing certain buildings. Random tasks pop up every now and then in order to increase fame points, such as supplying a commodity to a town or finding part of a treasure map. Fame points allow you to research a handful of new technologies, to construct warships and to hire the captains needed to commandeer them. Developing your town with new plantations, hospitals or shipyards also adds variety.

Despite being a trading simulation first and foremost, I think the game does fall short in the way combat is weaved into the game. Firstly, compared to Port Royale 3, naval battles have been changed from real-time battles into turn-based ones. You take turns exchanging cannon fire and attempts to board and capture enemy vessels. With a real-time 3D map, this seems like a strange decision, as it doesn't match well with the pace of the rest of the game. Moreover, the hex-based battles are colourless and never managed to give me the feeling of an actual naval engagement. The battles become more important when you start getting into wars with the other powers later in the campaign, making their lack of appeal unfortunate.

Secondly, automatically resolving battles is only available when the sides are about equally strong or when the player is much stronger. Otherwise, you simply lose everything by surrendering. Thirdly, piracy didn't really seem to be a viable strategy. You're able to turn every convoy with armed ships into a pirate fleet and attack rival merchant convoys. However, there are strong military ships patrolling everywhere and whenever they spot you, it's almost impossible to retreat: you'll need to click your pirate fleet out of harm's way before they catch you, but I was always too slow. Most battles ended up with the complete destruction of my convoy-turned-pirates, making them not worth the risk.

Port Royale 4 therefore isn't an easy game to play. Based on my experience, completing a campaign successfully in one go will take around 15 hours in total, but it's possible to play endlessly. I was able to build profitable trade routes after a while, but they need constant tweaking in order to remain so. It becomes really difficult to keep a profitable trade network when pirate attacks and war with other nations comes into play. Attacks strip you of the resources you're trading and buying while constructing military vessels quickly drains your coffers. I had to reload my games often because I was simply unable to return to making a profit.

Taken together, Port Royale 4 offers very detailed trading simulation gameplay that will definitely satisfy players who enjoy micromanaging in-game economies. There are many hours to be spent figuring out optimal trade routes on a beautifully crafted game map. However, I'm afraid the turn-based combat system diminishes the game's appeal to a more general audience, including myself. If you're able to look beyond the combat-related shortcomings though, this is the kind of game that keeps you up playing deep into the night.

"If you're able to look beyond the combat-related shortcomings, this is the kind of game that keeps you up playing deep into the night."

Port Royale 4 sets sail at the end of September

Those who decide to pre-order strategy game Port Royale 4 can now take a look at the closed beta.

The sequel will take us back to the Caribbean to conquer the seas, and we also have a new trailer courtesy of Gamescom Opening Night Live. 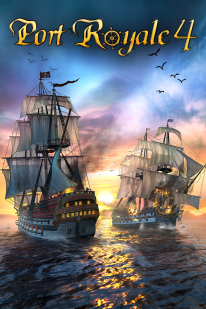