It's pretty insane to think that we have now received 24 feature films set within the Pokémon universe following its boom in popularity in the late 1990s. Sure, these haven't all been gold, but they delivered plenty of iconic moments that will forever be etched in the minds of fans. I mean, who could forget Pikachu breaking into tears when Ash was turned into a human statue, or when Ryan Reynolds finally showed his face at the end of Detective Pikachu.

Right from the very start with Mewtwo Strikes Back, each Pokémon movie has typically been centred around a mythical or legendary creature and the latest film Secrets of the Jungle is no different with Zardude taking the spotlight. The plot here pays clear homage to Tarzan, as a baby is found abandoned in the forest and one of the Zarude decides to raise it as its own. This decision doesn't bode too well with the Zarude Elder and the rest of his Pokémon buddies, so the newfound father is forced to live a life of solitude with the orphan baby

The film then follows this child known as Koko, as he struggles with his identity and begins to ask questions like why does he look different and why can't he use Pokémon moves. The real penny drop moment is when he is sent crashing down a waterfall and comes into contact with series mainstay, Ash. From there it becomes a mission to find out who Koko's birth parents are and why he was abandoned in the forest in the first place.

Although we've obviously seen this storyline before, I found it to deliver a number of heartfelt moments and it more broadly touched upon the love that foster parents can have towards their adopted children. Zarude, for example, gave up contact with the entirety of his people to raise this child and he is deeply upset when Koko finally unearths the truth. I also found it pretty touching to see Koko try to adapt to human life and enjoy simple pleasures that we take for granted such as eating ice cream or going clothes shopping for the first time.

Also staying on the theme of positives, I enjoyed seeing many Pokémon from the Sword and Shield titles here, especially considering we haven't received an anime for Generation 8. These were used in some pretty fun ways too; the town's mayor looked hilariously like a Dubwool, Cramorant tried taking a big ol' bite out of James' head, and Rillaboom is seen smacking the drums within a festival in the town. The setting of Milyfa Town I also found to be an interesting location for its setting too. It might be exclusive to the anime in an unknown region, but it's reminiscent of Galar with it resembling a quaint English countryside town.

The biggest fault that I had with Secrets of the Jungle is that its 'plot twist' could be seen a million miles away, and the latter half just feels far too predictable. I'll try my hardest not to spoil too much, but Ash and his newfound buddy do end up getting betrayed by a certain pointy-haired character, and it's obvious from the start that something might be troubling about him. The guy just exerts a sense of coldness, he doesn't let people in his office for some mysterious reason, and what normal law-abiding citizen has that hairstyle? The plot simply devolves in the second half to a typical 'stop the bad guy' scenario where Ash, Koko, and the Zarude are forced to put their differences aside and fight a common evil, and it's about as cookie-cutter as it can get.

Secrets of the Jungle is very much a movie of two uneven halves. Although it starts as a fun and at times touching homage to Tarzan things do soon spiral into more than familiar territory and I found my interest waning at around the halfway mark. It's still a fun romp that Pokémon fans should check out (providing they already have a Netflix subscription), but just don't expect it to size up to the likes of Mewtwo Strikes Back and Pokémon The Movie 2000.

Pokémon the Movie: Secrets of the Jungle 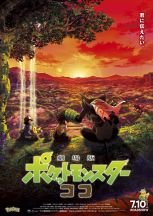