The latest Nintendo Direct aired only a few days ago, focussing entirely on the world of Pokémon, delivering a whole list of new promising developments for Sword and Shield alongside the announcement of an updated, remade version of 2006's Pokémon Mystery Dungeon: Blue/Red Rescue Team. Still developed by Spike Chunsoft and now titled Pokémon Mystery Dungeon: Rescue Team DX. And without further ado, here are our thoughts on the playable demo currently available on the Nintendo E-Shop.

For those who don't quite remember the original Blue/Red Rescue Team, Rescue Team DX follows the same storyline. After an unusual encounter with an unidentifiable being, you are thrown into the world of Pokémon, this time as a Pokémon, which is highly unorthodox considering in this case, you previously were a human.

In your new Pokémon form, you must search the lands for answers whilst simultaneously starting up a rescue team (a team of Pokémon who venture into Mystery Dungeons to save Pokémon in need) with your new partner. As the story progresses, it becomes obvious that the world itself is experiencing some abnormalities, which are assumed to be regular natural disasters. Traveling across many locations throughout the Pokémon world, some of which may be recognisable, while encountering many different creatures along the way, your journey will see you make all kinds of new allies whilst becoming stronger along the way.

At the beginning of Pokémon Mystery Dungeon: Rescue Team DX, you have to choose your Pokémon. Unlike the main RPGs where selecting your starter is part of the tutorial, here the alternative is a rudimentary interview where a bunch of questions are thrown your way. These are supposed to determine your qualities and likewise, the Pokémon you play as, however at the end of the interaction, the option to choose a Pokémon other than the one assigned to you is presented, sort of making the whole process irrelevant.

As with the original Red/Blue Rescue Team, there are around 15 playable Pokémon; the Kanto, Johto and Hoenn starters, as well as some fan favourites such as Pikachu, Eevee, and Machop. Shortly after, the choice of picking a partner from the same list presents itself. It's probably a good idea to choose a character who counters your Pokémon's type weaknesses, just in case you end up somewhere tough in the future. Once finished up here, you finally get to head into the world of Pokémon.

Pokémon Mystery Dungeon: Rescue Team DX is an RPG however it is heavily influenced by roguelike mechanics. The majority of gameplay takes place in Mystery Dungeons, which are randomly generated deep caves, mountains or towers filled with loot, enemies and because it is a rescue title, distressed Pokémon. In these dungeons, if you mismanage your health and faint, you will lose all progress for the run as well as any collected loot/money, hence the roguelike features.

You might be curious as to how the rescue team gig works? Well, in the Pokémon universe, other Pokémon can employ rescue teams to help those in need, by writing a letter and posting it through Pelipper Mail, or by slamming it on a message board. If you have never tried a Pokémon Rescue Team game before you'll notice that somehow, without the interference of humans, the local Pokémon have managed to build a structured and functioning town with postal services, stores, a booming economy and training dojos among other things. Yes, it is all a little bizarre but, this strangely perfect world is plagued with natural disasters making the rescue team business quite profitable, meaning you'll never be out of work.

Progressing through a Mystery Dungeon involves moving around each floor, defeating hostile Pokémon, collecting loot and searching for the stairs to head deeper. For the demo and the early stages of the game, you will only need to head down a few floors as you extract the in-need Pokémon your contract is paying you for. However, the later stages of the title, assuming it follows the footsteps of 2006's Red/Blue Rescue Team, will involve much deeper dungeons, featuring stronger enemies and even the occasional boss.

The demo version of this upcoming Switch title felt relatively similar to a DS game. The movement in the dungeons felt a little sluggish, especially when using a Pro Controller. The art style, whilst visually more impressive, wasn't anything to swoon over - the peculiar combination of drawn, storybook design and realistic Pokémon felt a little out of place. Yet as a counterpoint, the combat as a whole did feel much better. In Rescue Team DX, you can target enemies and even select moves with more ease, generally down to the fact that the Switch has much better control optimisation than previous Nintendo consoles.

As for the Pokémon we came up against, they were all from generation 1,2 and 3, meaning creatures from Kanto, Johto, and Hoenn were present, like the 2006 original. The models of these Pokémon do look much better than Red/Blue Rescue Team, however, we only got to see a limited number of them during the demo, with those usually being bug, grass or electric types.

To keep Rescue Team DX feeling fresh and similar to a traditional Pokémon game, you will have to level-up to make your Pokémon stronger. Experience is distributed between your party and will increase each of your Pokémon's stats with every rank up, exactly how the main RPGs work. You can also level individual moves by using them in combat, which in turn will make them stronger and more effective in battle. The best way to level-up is to head to the Makuhita Dojo, south of the town where you can trade in tokens (distributed as bounty rewards or found throughout the world) for a rigorous session of experience farming. To put it into perspective, going through the whole demo leveled us twice, whereas one 30-second run in the dojo, put us up three whole levels.

The demo itself is only relatively short, spanning around one hour and abruptly ending as a Diglett is abducted by a Skarmory. As we were quitting the game, however, we noticed some features that were not accessible yet but will be there when the title officially launches in early March. The two modes were Friend Rescue and Wonder Mail. Friend Rescue supposedly allows you to rescue teammates and friends who have fainted and Wonder Mail is still a bit of an enigma, although it could be a Mystery Gift sort of feature.

All in all, Pokémon Mystery Dungeon: Rescue Team DX seems to be a faithful recreation of the original 2006 title. If it seems to be something you're interested in, the demo is currently accessible on the Nintendo eShop for free, whilst the full edition will launch on March 6 for Switch. Till then, there's always the option of booting up the Gameboy Advance or the DS to scratch any rescue itch you might have.

"The art direction has had a complete overhaul with the old pixelated visuals replaced by a dreamy watercolour aesthetic."

The new Pokémon spin-off for Nintendo Switch is now available and we'll give you some pieces of poké-advice to help you progress faster.

Rescue Team DX is out on Switch today, so we're taking it out for a spin to see what it has to offer.

Rescue Team DX will be released on March 6, and there's even a demo available soon for you to try it. 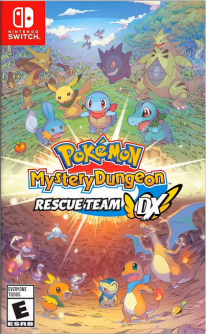