Pokémon Let's Go Pikachu and Eevee are remakes of Pokémon Yellow and allow players to once again travel back to the Kanto region with the goal of becoming Pokémon Champion. You start your journey as a young trainer from Pallet Town and travel across the beloved region earning gym badges and capturing as many titular creatures as you can. Let's Go offers some subtle deviations but still you'll be exploring Lavender Town's haunted Pokemon Tower, taking a spin on the luxury SS. Anne ship, and crippling the plans of the evil Team Rocket. The story still stands up some two decades later and the glorious HD visuals of the Switch help to further realise Yellow's vision of emulating the anime series in video game format.

Let's Go may have left the story relatively untouched but it does work to shake up many of the core mechanics with the most divisive of these changes being the catching aspect. Instead of reducing a pokémon's HP you can now offer them berries to make them easier to catch which we are sure will feel familiar to Go players. Catching is completed through motion controls in docked mode as you'll sling your wrist forward to throw a pokéball and the accuracy of your throw is the factor dependent on your success. Complicating matters is that pokémon will dash back and forth taunting you and some will even flap their wings and flail their arms in an angry tantrum to try and evade capture.

Never has the catchphrase 'gotta catch 'em all' felt more apt as you're incentivised to capture multiple creatures in exchange for stat-altering candies and bonus XP rewards. Instead of leaving your pokémon trapped and forgotten inside of the Pokécenters PC you can now send them to Professor Oak for candies - another mechanic torn straight from Go. Each pokémon can offer you different candy types with health candies improving your HP, quick candies improving your speed stat, and mighty candies bolstering your attack. Each pokémon now also has their own stat profile and you'll want to capture multiple of the same species to find one that you want to invest your time in training.

With Let's Go being touted as a gateway between Go and the mainline series there were concerns that the new duo of titles would be devoid of any real sense of challenge. Reassuringly, the strategic turn-based battles still remain intact and there's even Master Trainers that appear in the post-game to ramp the difficulty up even more with encounters where you are forced to go 1v1 with a specific type of pokémon. We did find a few tweaks though that did hinder our sense of discovery and hurt the overall balance of the game. Your rival and other NPCs will now walk you to the area you need to head to next and experience share is turned on by default which caused our team to be over-levelled awfully quickly.

Veterans returning to Kanto will notice that the locations in which pokémon now appear have been altered allowing for team combinations not before possible so early on. You can now catch a Bellsprout or Oddish (depending on the version) on Route 2, for example, and Rhyhorn when venturing through the dimly-lit Rock Tunnel. These variations help to refresh the experience for veterans and as a result, it pushed us to experiment with pokémon we wouldn't have used in the late game when our team was already highly levelled. Alolan forms from Sun and Moon are also present within Let's Go and can be traded for their Kanto counterparts with certain NPCs found in Pokécentres.

It may not offer the customisable depth of past entries X and Y and Sun and Moon but Let's Go still introduces many fun ways of personalising your own journey. Our favourite feature is that similar to Heart Gold and Soul Silver you can enable any pokémon in your party to follow behind you, which is often hilarious and expresses each pokémon's personality. Mr. Mime, for example, will trail along putting up invisible walls; Magikarp flops up and down desperately gasping for air; Golem rolls behind you just like a rock-covered pinball. There are also outfits that you and your partner pokémon can obtain by interacting with select NPCs and purchasable accessories such as bows, flowers and bandanas.

Let's Go also is the first main pokémon release to include local co-op and be playable on your television (no, we're afraid the Super Game Boy doesn't count). Another player can join at any time by shaking another Joy-Con and can be of assistance when capturing pokémon or facing off against a tricky trainer encounter. This second player uses pokémon within your party when battling and none of their progress is retained when they exit - it's more of a drop in support system rather than allowing to players to progress alongside each other. We imagine this will be a feature widely used by parents and older siblings who want to offer a helping hand to a younger player who may feel stuck along their journey.

The interactivity with the widely popular Pokémon Go remained a prominent selling point up until launch and it's arguably one of Let's Go's most alluring additions. You can sync pokémon caught within the app by connecting your smartphone and there's no limit to the number of accounts you can transfer pokémon from. The Go Park where you retrieve these pokémon isn't until Fuchsia City (home of the fifth gym leader) and your transferred pokémon will only obey you if you have the right amount of gym badges, so there's no way that this feature can be abused to easily breeze through the game. The only problem this interactivity creates is that it makes owning both versions of the title completely redundant as all version-exclusive pokémon can be brought over with the app.

Debuting alongside Let's Go is the Pokéball Plus, a new accessory that we were fortunate enough to get our hands on alongside our copy of the game. The pokéball-shaped controller allows you to complete all gestures with one hand as there is a thumbstick in the centre and a button on top which can be pushed to access the main menu. The main draw here though is that you can throw it like a pokéball when catching pokémon and it also works as a companion to Pokémon Go allowing you to hatch eggs and earn candies without looking at your device. It also contains the mythical pokémon Mew which is a nice incentive but it feels like a big middle finger to anyone who hasn't purchased the £40 accessory as they will be unable to complete their Pokedex.

Let's Go may struggle to strike the perfect middle ground when appealing to casual and veteran players but it still represents the series at its most accessible and interactive. We loved how it added a new focus on capturing pokéman and how its interactivity with Pokémon Go enabled us to make progress even without our Switch in hand. It did, however, feel childishly simple due to some tweaks such as the default experience share and we disliked how the Pokéball Plus accessory forced Pokédex completion behind a paywall. We do hope though that Game Freak can go back to the drawing board with some of these criticisms in mind as we would love to revisit other regions such as Hoen and Jhoto treated with the same level of interactivity and visual polish.

Gamereactor UK
+
Accessible and a good entry point for new players, borrows well from Pokémon Go, local co-op.
-
Pokédex completion hidden behind a paywall, a bit too simple at times.
is our network score. What's yours? The network score is the average of every country's score 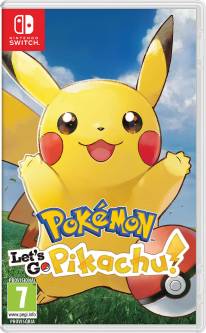