The Pokémon worlds are huge. They are among the biggest that exist in the world of portable gaming and before you've collected all Pokémons, beaten up all trainers, found all the secrets and done all there is to do, you've usually spent well over 100 hours together with your portable machine.

And Pokémon has never been bigger than it was in Pokémon Gold and Silver for Game Boy Color. Not only did you have to face all the challenges in the Johto-region, but when you were done there the whole of Kanto was unlocked. You know, the world from Pokémon Red and Blue, complete with new challenges. Massive. Absolutely massive.

Because of this Gold and Silver have always held special places in the hearts of every Pokémon trainer, and because of this it's not very surprising that Nintendo decided to do a remake of the two instead of making brand new games. These new versions have been named Heart Gold and Soul Silver, and if possible they are even better than the originals.

What Nintendo have done, except making the graphics better, is to really listen to the fans and made the most intuitive Pokémon experience ever. For example you can now run without constantly having to hold down a button, you can use several items without having to go through menus and the Pokémon you've currently selected is actually visible on the screens so that you can communicate with it.

Simple, but clever, stuff that even though they might seem small, actually lift the game up to new heights. I had promised myself that I was done with Pokémon after having captured hundreds of the little buggers in Pokémon Platinum och really taken the "gotta catch them all"-motto to heart. For the first time in ten years, I was getting fed up with Nintendo's pocket monsters.

But here I am again. Sweet music, cute humor and clever dialogue. I level my monsters left and right, I crawl through grass where I've heard the rare ones live and I cringe when I see the holes in my Pokédex that just need to be filled. Long story short; I'm caught in the Pokémon net, once again.

Nintendo wouldn't be Nintendo if they only released a simple remake, no matter how good. In this case the new gimmick is called Pokéwalker, which is a step counter with a LCD-screen to which you can transfer your Pokémon. Then you can look at it wherever you are, earn bonus items and play various minigames; kind of like a more advanced Tamagotchi.

Despite the fact that I have trouble putting away Pokémon Heart Gold I have a hard time shrugging off the feeling that it's time for Nintendo to move on with the series. The kids will still love it, but it's when you play a game like this that you're remembered of how little has actually change since the first days of Pokémon. We're still talking 8 bit-sounds, characters that are hardly animated, simple graphics and the same random battles that fans of roleplaying games have begged the developers to get rid off for years. None of it makes Pokémon Heart Gold any less addictive and fun, though, and this remake of Gold and Silver will probably satisfy everyone.

In many ways, Pokémon Heart Gold might be the best game in the series so far. Hopefully, it will also be a good bye to it. Next time, I truly hope that Nintendo do something completely different. 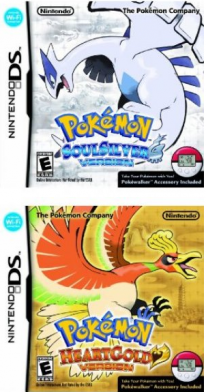