Just before E3 this month Playtonic and Team 17 revealed that Yooka and Laylee are returning in Yooka-Laylee and the Impossible Lair, and when we were at the expo in Los Angeles we talked to designer Harry Robinson about the game and where the idea came from in the first place, since this isn't quite the same as the original.

"When we finished Yooka-Laylee we always knew that we wanted to move on to a 2D platform game, because we kind of like keeping our fans surprised, and I think everyone just expected us to roll straight on to a sequel for Yooka-Laylee," he explained. "It seems like the obvious thing for us to do, but we were like 'you know what, no, let's just try our hand at a 2D platform game'. We have a bunch of people in the studio who are veterans of the genre anyway, and we're pretty confident we could have a good crack at it, and so yeah, here we are."

We also talked about the Overworld in the interview, which you can see below. This it the world in which you can access the various levels of the game, and this area also has its own unique challenges and puzzles to complete.

"So Pagies in the original game, they were used to, as you say, expand the game world and make it larger, whereas we're using Pagies in this game transform the Overworld," Robinson explained. "So we didn't want to be too daunting and players to get lost in a huge environment, and we also wanted to pace the game so that you found the right sets of levels at the right times, so we've got Pagies in there, and they offer you a little challenge, and when you complete the challenge they fly around the area and transform an aspect of the Overworld, unlocking a new path and a new set of levels for you to do."

"And that's kind of one of the things about the Overworld as well - the level's kind of non-linear, so once you unlock an area you unlock three more levels and you can choose what order you want to do them in or even you could kind of progress a bit further, unlock another area. It's quite flexible in terms of how the player wants to progress in the game, and of course, because of the Impossible Lair, you actually don't need to play any of the levels."

For more on the game check out the new gameplay and interview below, showing you the 2D platforming action. Do you like this change of pace? 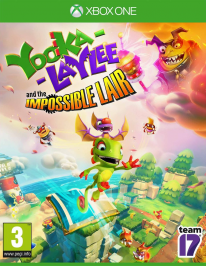