Super Smash Bros. I need to get it out of the way as that's what all the talk has been about. Playstation All-Stars Battle Royale is so much like Nintendo's original that it's the first thing mentioned in the gameplay paragraph on Battle Royale's Wikipedia page. And it's easy to see why. The game has essentially replaced the Nintendo characters with characters from various Playstation games and added a handful of guest characters. The rules have been somewhat modified, but largely it offers the same experience and it comes across as a shameless rip off.

With that said we can focus on what Sony shouldn't be ashamed of - and that's the fun factor. At its best Playstation All-Stars Battle Royale entertains and offers frantic party fighting. And regardless of whether it's a clone or not, that is the most important factor to consider.

Right at the start you're given a brief introduction to the basics of the game. Simple stuff: you have three different attacks at your disposal that can be performed in all directions, you can block, use the right analogue stick to throw, and perform super attacks with your right shoulder button once the meter has filled up.

No further information is required and I pick Fat Princess and go on to beat up that douchebag Nathan Drake, as well as Parappa the Rapper, and Tekken's dead serious Heihachi Mishima on a level taken from the Killzone franchise. I'm immediately struck by how beautiful the game looks.

I've mainly played the game on PS Vita, and even on the smaller screen you can see how incredibly detailed the characters and levels are and the effort that has been put into this piece of fan service. During the back and forth match the level changes gradually. From duking it out mid-air, we're soon battling on the ground until finally everything is turned into an Ape Escape world as simians overflowing the place.

I'm impressed, and as you recognise nods and recall all those glorious moments they refer to, I'm reminded that Sony has been in the console business for almost two decades.

Sure, they lack some of the star power Nintendo sports, Nathan Drake isn't much compared to Link, Parappa gets flattened by Donkey Kong, and Kratos is a complete unknown next to Mario, and what's some Helghast colonel compared to Fox McCloud - but that almost makes it more special in some ways.

Because you realise what Nintendo fans get from Smash Bros. You feel more special if you're a longtime Playstation gamer as you recognise all the characters.

And while Super Smash Bros is more designed to offer something for all tastes - this is more targeted towards older core gamers. Not that it is overly violent in any way, but picking up a broadsword with the realistically designed amazon Nariko from Heavenly Sword and chopping the cocky Dante from DMC Devil May Cry repeatedly doesn't come across as quite as cheerful as what Super Smash Bros. offers.

The fact that you actually destroy your enemies in Playstation All-Stars Battle Royale rather than just push them off the level also adds to this. Beating up your opponents fills up your super meter, as it's only with a super attack that you can score. And when you activate your super attack the idea is to eliminate as many players as possible.

The super meter can be charged to three levels, each granting a stronger attack. The final level unleashes a special character-specific animation and an incredibly powerful attack. For instance you get to man a massive cannon with Colonel Radec where you aim a cross hair and deal instant kill shots for a limited period of time. Since the standard setting is to play until you get three points, you can win by simply pulling off one super move, so it's important to pay attention to what your opponents are up to.

Currently there are only twenty playable characters, with two additional scheduled for release early next year. It's a rather thin roster compared to what we're used to in proper fighting games, and at that they've included two versions of Infamous' Cole McGrath to fill up the roster.

Personal wish fulfilment would have asked for more characters and especially ones I associate with the Playstation brand. It's cool that they've managed to include guest characters from Bioshock's (Big Daddy) and Metal Gear Rising: Revengeance's (Raiden), but not including Crash Bandicoot or Spyro the Dragon is somewhat blasphemous.

I would also have loved to have seen some more exotic and forgotten Playstation characters. Why not Jumping Flash, the dinosaur from the tech demo of tat very first PSOne demo disc, a rider from Cool Boarders, someone from the Rapid Reload duo or a golfer from Hot Shots Golf? I also miss characters that may not be Sony-owned properties, but still made major contributions as Sony established themselves in the console market. Characters like Cloud Strife from Final Fantasy VII, someone from the Toshinden cast, Lara Croft or the clown from Loaded.

Perhaps I'm trying to hard to find faults, but a few more characters certainly wouldn't have hurt. An area that deserves props however, are the levels. There are lots of them and they are large and varied. Most characters have been given a level of their own and they constantly change during matches. One of many favourites is Sackboy's level that starts out just like any other Little Big Planet creation. You can then see how it's fleshed out through menus we're all familiar with while the fighting continues. Halfway through a match Buzz appears and starts asking questions. You better be able to answer or you're getting mauled by cake. The Loco Roco level and the one taken from Rarappa the Rapper are two other firm favourites.

Much like in Super Smash Bros, the characters are very unbalanced. Especially in matches one-on-one - I feel as though I've witnessed several infinite combos, and as I play against colleagues it appeared as if the ranged attacks from Colonel Radec were causing them a lot of problems. While balance issues such as these would render most fighting games unplayable in my eyes, it's not a major problem when it comes to this brand of party fighting.

Almost all characters seem to be overpowered, yet it evens things out and adds to the fun factor. The push for rematches after bouts is a good indicator that people are at least enjoying the game.

As I wrote previously I've spent a majority of the time with the game playing the PS Vita version. That's partly due to the fact that it's completely compatible with the PS3 version, and partly because it feels more natural to play online with this kind of game on PS Vita. On Playstation 3 you want to play against three mates on the couch, and it feels a little strange to play against anynomous opponents online.

And it works perfectly. You just go online and you're right into matches. Since you face opponents playing on both Playstation 3 and PS Vita, you're not running the risk of not finding other players as is this case with many other PS Vita games. There are plenty of players to challenge and I've faced off against the world at McDonald's, during a particularly boring family dinner, and in a hotel room.

What's missing from Playstation All-Stars Battle Royale is a decent single player mode. Sure, there are some dutiful campaigns with a start and a finish, but they come across as rather pointless. You get a short intro, and then you face all the characters until you're face to face with the very first Playstation mascot, Polygon Man (whose life was cut short as he was done away with before the first Playstation was launched).

Something a little more inspired would have been nice. The only appeal are trophies and some optional moves for the characters. Perhaps you want Sackboy to celebrate in a different way, or for Parappa to make a different entrance. Those are the kinds of unlockables you can look forward to, but in reality they add very little. And together with the somewhat sparse selection of characters the single player is the most significant negative to be found in Playstation All-Stars Battle Royale.

At the end of the day I'm still positively surprised by the game. Sure, it's a rather blatant knock off, and it's one that follows on another Nintendo knock off, Little Big Planet Karting, so it's fairly easy to see where Sony have been getting their inspiration lately. But as long as it's fun, who cares? Playstation All-Stars Battle Royale is recommended to Playstation owners looking for a fun party game, but don't expect quite the same level of fan service as with Super Smash Bros - Nintendo still rules the party fighting scene in this respect.

Online services for three PS3 titles are coming to an end.

Oddworld's Abe not an All-Star

Looking forward to "next chapter".

Kat and Emmett join the fight.

Playstation All-stars go at it.

Offline
rudysk8er on the 26th of November 2012 at 20:00.
i agree that it is a knock off but its still a fun game, i respect sony for stepping out of their boundaries and gaining inspiration from a game industry like nintendo , super smash bros lives on 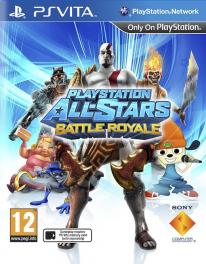