Epic-scale first-person shooter Planetside 2 has just been given a major content update that will shake up things up considerably. Escalation landed on test servers over the weekend, with the full release due on Wednesday, February 19, and it looks like Daybreak is hoping to crank things up a little.

"Camaraderie, teamplay, and scale are the bedrock principles PlanetSide 2 is built upon, and the new Escalation game update aims to reinforce all three of them," the studio revealed on Steam. "This massive game update introduces new content for players of all levels, creates a deeper experience for our most dedicated player communities, and adds strategic depth and communal goals to PlanetSide 2 gameplay."

A big part of the update is giving players more tools, with so-called War Assets crafted during the game with resources captured by an Outfit. These War Assets take several forms (see the list below), but the main attraction is "the biggest bad the battlefield has to offer", the new Bastion Fleet Carrier. Here's a bit of official detail:

The Bastion is the ultimate force multiplier on the battlefield, capable of engaging enemies at long distances with mannable turrets, and serving as an air vehicle spawn point for your Outfit. They require a coordinated effort to bring down (multiple weak points must be destroyed), and when an Outfit calls one planetside, their enemies must respond or risk being overwhelmed!

As part of this continued focus on the Outfit system, we're getting Outfit Wars where teams compete to battle on Desolation, a new asteroid map, and a revised progression system that feeds into the same system. Finally, there's a new hub area called Sanctuary being added.

"The initial barrier to entry will be sizeable enough to discourage some gamers, but for those who persist, an experience like no other awaits."

The new Bastion Fleet Carrier is entering the battlefield along with a number of additional game-changing features.

Daybreak targeted after war of words with John Smedley.

Planetside 2 gets a release date on PS4

Full release due on June 23.

Sony confirms that the MMOFPS is heading to these shores imminently. 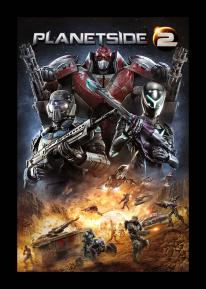