Pikmin 3 was the focus of a large part of the latest Nintendo Direct, with Nintendo chief Satoru Iwata revealing new campaign details, along with a release date.

As far as the story mode goes, instead of the character from previous game, players will take control of one of three new characters; Alph, Brittany and Charlie (the captain). The new characters are from a planet (Koppai) facing a doomsday due to a chronic lack of food.

The three explorers have an accident while travelling, and when they crash-land they encounter the Pikmin. They're on a mission to collect fruit for food, which becomes an important gameplay mechanic; more food allows more time to explore the planet, meaning they can search for more seeds to take home.

Players divide up abilities between different characters, and the Wii U's Gamepad becomes an info terminal, letting players see areas that they've explored, and move between characters and send them to different places.

Story mode details were revealed today, and we were promised more on the game's multiplayer and challenge mode in the coming weeks. The other major Pikmin 3 related news is the release date, with the game expected to launch on July 26. 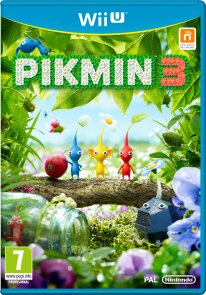