The Legend of Heroes: Trails of Cold Steel series is one that we haven't always had the most exposure to here in the West, but this month we're gearing up to get Trails of Cold Steel III on PS4, over two years after the title landed for Japanese players. That's why we were especially intrigued to talk to series producer and president of Nihon Falcom Toshihiro Kondo in London, as we did just recently.

At the start, we entered a room that reminded us somewhat of a jazz bar. There at the table sat Kondo himself, and with a translator at his side, Kondo first described himself as a president "who works on the front-line of development" because "at Falcom [...] management and business are very important, but equally important to that is game development."

"I do scenario writing. I do directing, producing, I still do planning and scriptwriting as well," he elaborated. "When I originally started the company I was doing this, and even after I became this position, it's something I wanted to continue."

"That's why we're here. I wanted to make sure I remained involved in that."

It was a pleasure to talk with Kondo about not only his work as president, but also about the long-running series, which has been around for 30 years. With the new RPG imminently releasing, there was a lot to talk about regarding Trails of Cold Steel III, and Kondo himself was excited to get into it.

Trails of Cold steel III is the direct sequel to Cold Steel II. It revolves around the main character of Rean, who is now a military professor. One thing we were told is not to be put off by the number III though, as there will be "a comprehensive in-game encyclopedia" in the game to help you catch up with what came before.

In other words, you don't need to have played the previous entries to get the most out of this one, but for those who have, there will definitely be some nods to previous titles. That said, it's set a year-and-a-half after the Erebonian Civil War of the second, so things are very different this time around.

All through our meeting, one word kept coming up: story. It was obvious how proud Kondo is of what Nihon Falcom had produced, saying that "you won't find better anywhere else" when it comes to the story.

We were promised a narrative that will pull at our heartstrings; a genuine emotional journey that will reach a befitting climax. This is an RPG for the story lovers out there, that has a grounded real-world authenticity, along with some subtle nods to history, since Kondo himself is a lover of history.

"For example, the stage for this part of the saga is in a country Erebonia it's loosely based on Imperial WW1 Germany [...], but it's not based on one event in history," Kondo said, adding that the story will contain many twists and turns.

"You could say that the main sales point of the whole game itself is that there is a lot of emotional investment," Kondo continued. "That obviously goes for the events that happen in the game, and the characters and their interaction, but also for long-time series fans there are lots of things that were kind of hinted at or began to be revealed in prior games that kind of come to light throughout the course of this game, so it's got a little something for everyone, and the storytelling is very dynamic and very moving, so you've got a lot to look forward to."

We didn't get to play the game then and there, but there is a demo available for you to check out the visuals and the gameplay; a wise idea considering how unfamiliar some players in the West might be with the series. If you've played Valkyria Chronicles, the anime style here is slightly similar.

When asked what he most wanted to change from the previous game, he immediately mentioned the combat. The development team spent a lot of time making the turn-based system seem slicker and quicker, and by focusing just on PS4 rather than Vita they had access to "more buttons" to allocate commands to each, making everything "a lot more smooth".

"One of the issues that we faced with the previous titles has been that the tempo was a little on the slow side," Kondo said with regards to the combat. "We really wanted to improve on that."

The lack of Vita support was bemoaned in Japan, but Kondo assured us that, because they had focused on PS4, "there was a lot more we could do graphically", such as extra polygons for characters.

Speaking of characters, we asked which character he most saw himself in. He took a second, chuckling as he said Rean. This was because Rean "is really relatable to Japanese people" as he is more "quiet and more reserved" in the game. "He has a lot of difficulty" too, so he can "definitely sympathise with that character."

"One thing I will say is that Rean has a tendency to pat lots of girls on the head and be liked by many girls. So, that one place I definitely don't relate to this guy," he laughed.

Above all else we noticed that Kondo is a modest man, and he regularly brought up other games during our conversation, like the classic Suikoden. Also, when asked what he had enjoyed about being in the UK, he said London is a perfect blend of old and new, and that he wanted to visit the Bovington Tank Museum, as both he and his son love playing World of Tanks.

Before we left, we just had to ask what Kondo is proudest of with this entry, and it turns out there's a lot.

"The real draw again here is the story and the [...] world-building," he told us. "If you're someone interested in JRPGs and you're interested in this, I definitely recommended it. Furthermore, this is a game, that it's kind of the culmination of 15 years worth of storytelling, and so particularly starting here with Trails of Cold Steel III and moving into IV, this is the climax of that tale that we've been building on all this time, and it's an amazing climax, and I want everyone to experience it."

"Like we talked about earlier in the conversation, we've tried as hard as we can, that even if you're starting with this game, there's no problem, and you'll be able to still get involved, feel invested, and be interested in what's happening. And should you like what you play, you can always go back and play the other ones as well."

The Legend of Heroes: Trails of Cold Steel III is releasing on October 22 in North America and Europe, landing exclusively on the PS4.

Picking up the Trail: The Road to Trails of Cold Steel III

Nihon Falcom's president Toshihiro Kondo sat down in London to talk with us about the series, his work as a developer, and more.

Nihon Falcom's RPG to see release in Europe and North America this fall on PlayStation 4.

It's a PS4 exclusive.

The Legend of Heroes: Trails of Cold Steel III 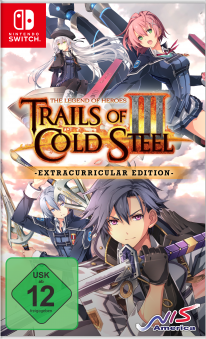