Ever since EA stopped making golf games after the release of Rory McIlroy PGA Tour back in 2015 it has been HB Studios that has been running the market for golf games. Just before the release of the third iteration in the series, The Golf Club 2019 Featuring PGA Tour, 2K Sports came along and started funding the team. There wasn't enough time to significantly impact the final product then, but now, two years later, the studio is ready to give us a new golf game: PGA Tour 2K21.

Personally, I have played The Golf Club games even more than I did the good old Tiger Woods games, which says a lot as those discs spent a lot of time spinning in my PlayStation 2. The games have been more on the simulation side whereas EA's had more of an arcadey feel to them. With the entrance of 2K Sports, the hardcore fans of the series have feared that the same was bound to happen to this series as well. I'm happy to report that it has not.

Actually, that is a semi-lie. There are some aspects of the game that are more arcadey, but the simulation part is still very much present, and even more challenging than ever. HB Studios and 2K Sports have found a great way to make the game appealing for both the casual and hardcore golfer.

First things first. Another late addition to The Golf Club 2019 Featuring PGA Tour was the partnership with the PGA Tour. It didn't mean too much to the game other than a few official courses, but for PGA Tour 2K21 it has been taken one step further. A total of 12 PGA Pros are available to play against in the improved career mode, and even more official courses have been added. The PGA tour leaderboards in career mode are also filled with real player names, but there are some names missing such as Tiger Woods, Rory McIlroy, Phil Mickelson, Viktor Hovland, and Collin Morikawa. With the developer also removing the option to edit player names, it will be interesting to see if there will be updates in the future.

The career mode also has a few other improvements. Tee times are now realistic during four-round events, as the leaders tee off last in both rounds 3 and 4. Difficulty can be set pretty much exactly as you want it with great ways to customise the challenge. You can change the difficulty of your opponents while having different difficulty settings for the conditions. You can also decide if your opponents should be consistent from round to round, event to event, or even how likely it is that they will even play in most of the events. This, in addition to rival challenges against the 12 featured PGA pros and a lot of sponsor challenges, makes the career mode way more appealing than ever before. Statistics are also much improved from last time, and from what I can tell after two seasons on the tour, they seem very accurate.

The presentation of the tournaments in career mode has also been adjusted both with graphics and a whole new commentary team. John McCarthy has been demoted to the court giving insights every now and then, while Luke Elvy and Rich Beem are back in the booth. They are a fresh addition, but eventually, it is bound to be repetitive like most other sports games. Some of their comments are funny, but not the sixth or seventh time you hear them. For the rest of the game, such as multiplayer and societies, John McCarthy is still the guy in the box. After all, he is the voice of The Golf Club.

Speaking of societies, the developer has decided to remove offline societies for PGA Tour 2K21 for some reason. My guess is that they feel the career mode is good enough as is, and they want to showcase it as much as possible. Also, there is no problem setting up a private online society and playing that alone as an alternative option to the old solo societies.

There were big differences in the various platform versions of the last game in the series, and menu-wise it seems to still be the case. During this review period, I was only able to play the PlayStation 4 version, but compared to videos I have seen from the PC version it seems like the difference is the same as before. On a more positive note, it looks and feels like the difference in gameplay is gone, which would be a huge improvement. For reasons beyond our collective comprehension, PlayStation-users had a huge advantage in online third-party tournaments like TGCTours in the previous version, but this seems to be a thing of the past.

The most important thing is still gameplay, however, and PGA Tour 2K21 has as previously stated found a way to include all players no matter their skill level. For casual players, there are a ton of assists to make the game easier. There are presets available to help choose what kind of gameplay I want to experience, but I can also go in-depth in each of these settings, choosing everything from my swing difficulty to the number of putt previews I have available. Also, I can now decide if I want to worry about wind, lie and/or elevation or not. This makes the game very accessible for anyone just wanting to sit back and relax with a round of golf, or more challenging for simulation fans. This game is very, very challenging on the hardest difficulty. Oh, and yes - backspin is a thing again in PGA Tour 2K21 (after it being a sorely missed feature in its predecessor).

The graphics and sounds of this new game are not greatly different from what we've come to love. There are a few improvements here and there, first and foremost in terms of how the grass looks, but the general graphics are okay without being spectacular. The crowd still has no impact on gameplay and they turn into ghosts as the golf ball comes towards them, and the animations of the golfers is pretty much the same as before. The sounds on the course are as good as they used to be, and the soundtrack is as chill as ever.

There were concerns that 2K would bring in some "pay-to-win" elements from the NBA 2K series. Most people were afraid that the new attribute system for the clubs would mean the ones paying the most money would get the best clubs. Thankfully, this is not the case. The new club attributes system works wonderfully as the clubs that give me more distance are less forgiving and makes them a lot harder to hit. It's a well-balanced system that works wonders, if you ask me.

Finally, the course designer has gotten a few upgrades as well. This feature is possibly the biggest reason why The Golf Club game lives on for a lot longer than other sports games. The amount of great user-created courses makes it possible to play a new course every single day. Objects in the designer used to be locked to a specific theme, but these are now completely open, which opens up a whole world of possibilities. This, combined with new elements and the ability to layer textures with speed and ease, will probably lead to some amazing creations from the talented bunch I know will spend a lot of time with this part of the game.

All positives aside, the game definitely still has its flaws. The number of times my ball has slowly rolled into the sand trap just to have a lie of 70-80% is more than you want to know. There are also times when I see the ball clearly in the heavy rough, but it still says a 60% lie. The drop system when something got caught in my eye and I hit the ball in the water seems slightly improved, yet far for perfect. Splash shot is a great addition to get out of the green side bunkers, but with the addition of that on top of the pitch and flop shot, it makes for a less challenging experience around the green, even with the weird decision to remove the punch shot, a fairly common shot in golf these days. Cross-play still isn't a thing either, despite this being a sport that is perfectly set up for it. Still having to share your results online on third-party sites to have some comparison is just ridiculous at this point.

All in all, PGA Tour 2K21 is still very much a great game. No doubt about it. It will please both those who are looking for a more arcadey experience and those who want a pure simulation, which means an even bigger potential player base. With great additions to the career mode, improvements to the core gameplay loop, and with new licensed players and courses, it is still the best golf game out there, and will probably remain so until the next one is released.

ARTICLE. Written by Daniel Andersen on the 5th of October 2020 at 17

Here's hoping Eirik avoids too many bogeys when playing this year's golf game from HB Studios.

It's almost time to head to the virtual golf course with 2K. The game is set to get more info next week. 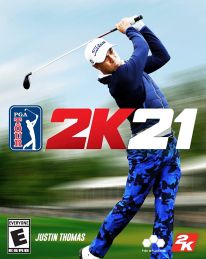