Back in February we found out that Nintendo 3DS game Persona Q2: New Cinema Labyrinth is coming to West in June, or June 4 more specifically, and now a new press release has revealed a new trailer called Returning Heroes, showing us even more gameplay as well as a heroine making her debut in the series.

The press release also gives us a long list of DLCs coming to the game at launch, which you can see below (all prices are in USD, and we've reached out to Koch Media for other prices):

You can get a Launch Edition of Persona Q2 if you pre-order or get a first-run copy, while stocks last, and this includes an artbook.

While you wait for the release date to roll around you should check out the official website too, as that has just been revealed as well.

What DLCs are catching your eye?

Persona Q2 getting a ton of DLC at launch

We also have a new Returning Heroes trailer to show off the game ahead of its June release, as well as the official site.

A new trailer gives us a taste of what to expect as Joker and the gang get trapped in various films that transcend time and space.

Nintendo 3DS game will combine characters from several games in the series.

The long-rumoured game has finally been made official. 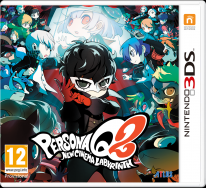