Earlier this week, Atlus revealed new information about Persona's spin-off Persona 5 Scramble: The Phantom Strikers. In the Japanese video that you can find below, we see several aspects that enrich the Musou formula from the hands of the Dynasty Warriors developer Omega Force. We saw platforming sequences, animated movie scenes, new characters and free exploration without enemies to fight. The social components of the Persona series have also been presented and that might be an interesting contrast to the action-packed gameplay the studio is widely known for.

Scramble is a sequel to Persona 5, which begins about half a year after the end of the main game. The group gathers for summer vacation, came to notice that the cognitive world has spawned twisted palaces all over Japan again. The Story of Persona 5 Scramble: The Phantom Strikers takes us across the land and it looks like the Phantom Thieves have the chance to visit places from former entries of the series.

Regarding the action gameplay we've seen so far, players are allowed to choose between two different melee attacks, and there is a button for our persona and the equipped ranged weapon. Jumping and Dodge are also available, which is something the Warriors series did not always take into account. With the exception of the young navigation mastermind Futaba, all members of the Phantom Thieves are playable.

February 20, 2020, is the Japanese release date of Persona 5 Scramble: The Phantom Strikers, no Official has commented on Western localization yet. Further information will follow on 4 December in another live stream. Below you can find new screenshots, showing the localization parts Persona fans might enjoy. By the way, this adventure is created in consultation with Atlus' Persona team.

REVIEW. Written by Stefan Briesenick on the 9th of February 2021 at 15

The follow-up to the incredible Persona 5 Royal is leaving a little to be desired.

The game is currently 35% off in Japan on PS4 and Nintendo Switch.

And, the game doesn't even release until tomorrow.

PREVIEW. Written by Stefan Briesenick on the 15th of January 2021 at 15

We completed the first chapter of the latest Persona 5 spin-off, to tell you how we feel about it.

PREVIEW. Written by Stefan Briesenick on the 11th of December 2020 at 15

The phantom thieves will have to solve another case next year. We watched the start of the adventure.

The new trailer also shows off more stylish gameplay and shortens the title.

The next step on the long road to releasing a Persona 5 Scramble: The Phantom Strikers in the west has been taken. 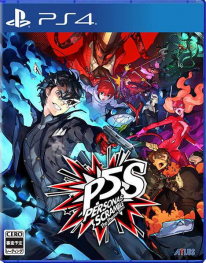