Persona 4: Arena is an excellent fighting game and a very good continuation of the Persona franchise. It successfully manages to merge the universes of both Persona 3 and Persona 4 in order to narrate a really interesting story. The great effort done to make it excellent as both a fighting game and as a Persona title is definitely the biggest achievement of a production that never shows signs of weakness, and in which every minute played further improves the overall experience.

Let's start with its success as a fighting game. Persona 4: Arena is a 2D title with anime-style sprites and 3D backgrounds, which at first glance takes us back to the golden age of the genre in the 90s, when Capcom and SNK offered the best of their catalogs. It is the type of game that favours spectacle and speed, in which every single decision is crucial every single second. Arc System Works already showed this with Guilty Gear and Blazblue, series from which Persona 4: Arena takes a lot and owes even more, for their experience accumulated over more than a decade of making fighting games has helped the studio to polish its style and to tune the combat system to perfection. It often happens that a fighting game based on a title from a very different genre fails to provide a worthy experience; this is not the case, as we are probably talking about the best 2D fighting game in a long time.

Its success in the genre starts with a solid premise: being accessible to everyone. Initially the combat system seems shallow: normal and strong attacks, both for the character and for their Persona (TV World entities invoked to fight on the player's behalf). Jumps, dodges and a couple of special abilities that you pull off the same way with every character. In fact, it is easy to rely on basic attacks and end up developing a rather powerful and spectacular combo, something that will encourage fighting rookies to give it a try.

But advanced players have nothing to fear, because while it has an accessible control scheme, it also offers great depth. Executing a large combo is rendered useless if the opponent knows how to use counters, how to better manage the SP or when to use stronger skills. If they know how to let their opponent without Persona or if they apply status effects to it which hinder its ability in combat. In other words, Persona 4: Arena is easy to play at first, but very, very difficult to master, as the AI and other online users are happy to remind us again and again. However the journey towards perfection is so inviting and satisfying that we will want to become experts with our favourite character.

That is because another great achievement of Persona 4: Arena is despite having only thirteen characters on the roster (from Persona 3 and Persona 4, plus a new one for this game), they are all so very different from each other. While basic controls are the same across the board, how each character plays changes dramatically. Some are faster, others perform better in the air, there are those who are more powerful using his or her Persona and those who fight better with their fists... It is very important to practice and experiment with them in order to find the one that best conforms to your play style, and improve your technique from there. To this end, the game has plenty of game modes, from Training and Versus (both local and online) to combat challenges and the inevitable Arcade and Story modes.

This is where the other side of the game comes into play: to be or not to be fond of the Persona franchise. Both Arcade mode and Story mode tell the same adventure from every character's point of view. In Arcade there's the short version for those who simply want to enjoy the fight game, eight bouts per character, quickly presented events (in a traditional style) and that's all. But in Story we will dive into the canonical sequel of Persona 4's story, with plenty of dialogue, video sequences, decision making, different endings for the characters, new unlockable chapters and, ultimately, a good number of hours to once again immerse ourselves in the Persona universe and have fun with our favourite characters.

Indeed, knowing the franchise well enough makes this game even more interesting. Although it may seem a triviality, the fact that some of the best known music tracks from Persona 4 have been reused here may find fans of the series - playing for the first time after years away from the universe - staring for half an hour at the main menu screen, just revelling in the soundtrack and evoking feelings, memories and empathy for the characters and settings that appear on screen. The story also makes sense and seamlessly blends the worlds of Persona 3 and Persona 4, becoming a continuation of the events that exposes the questionable sequel of Persona 3, The Answer (it's way cooler to continue the P4 story with a solid and stylish fighting game that keeps the essence of the franchise, rather than poorly trying to expand it with a dungeon crawler that destroys every good point from the original, as happened with The Answer). Also, thanks to the character unlocking system and decision making, getting 100% of the game in the story mode will be something that will take many more hours than we are used to in the genre (it's more or less similar to Blazblue's story mode, but without those illogical traps like having to let us lose in certain battles).

In short, without getting lost in the world of nostalgia, Persona 4: Arena is a total triumph. As a fighting game it's intense, fast, frantic, spectacular, with a simple yet very deep combat system and, although it has only a few characters, these are very different from each other, which makes it attractive to experiment with them and to find a favorite. As a Persona series game, it superbly plays the trick of nostalgia, makes excellent use of the two universes present (P3 and P4) and provides us with a long, deep story, full of surprises and with different endings for the characters. Although it must be said that one story you can only fully enjoy if you've played the two previous instalments. So much that, if you did, you can and should add one more point to that review score.

HQ
Gamereactor UK
+
If you've played P3 and P4, it masterfully plays with nostalgia and becomes unforgettable. Repeats the excellent soundtrack. Simple combat system but with enough depth. Long and with many game modes.
-
To fully enjoy it, you must have played P3 and P4 before, if not you'll miss many details. Without that, for a fighting game it would be one with a rather reduced roster and a difficult to understand story.
is our network score. What's yours? The network score is the average of every country's score

There are two ways to approach this: you can either love the franchise or be unfamiliar with it. Atlus and Arc System Works knew that and managed to satisfy both audiences.

Plus some in-game shots. 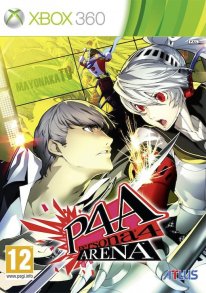