Ubisoft partnership with Brazilian football (soccer to some) legend Pelé for Academy of Champions - a slightly different take on the sport, They have released some new assets as well as details on the different super moves you can pull off in the game. First up some nifty artwork featuring four colourful teams.

Super moves in Academy of Champions:

Super tackle: Take the ball off your opponent's toes in a blink of an eye with this lightning-fast slide tackle.

Helix Kick: Bamboozle the goalie with this insane corkscrew shot.

Banana Kick: Put extreme bend on the ball - the keeper won't know which way to turn.

Chopper: A spinning tackle frenzy that will send anyone in your path flying - including your own teammates!

Unstoppable Rush: Release that pent up aggression by knocking over anyone that gets in your way as you charge towards goal.

Cat-like Grace: Glide through tackles and defense like a knife through butter.

Stealth Attack: When Sam Fisher turns on his night-vision goggles nobody can see him - ideal for getting through on goal undetected.

Eagle Strike: Altair's assassin training helps him to launch into the air and unleash a lethal strike that will take out the keeper before it hits the back on the net.

Acrobatic Leap: Why go through the defence when you can just leap over it? The other team won't expect that!

Plunger Shot: The Rabbid weapon of choice makes for a very potent shot at goal.

Photo Fanatic: Jade will use the flash of her camera to temporarily stun her opponents and make them lose the ball.

Perfect Dribble: Opponents will be stunned by Pele's unbelievable ball skills rendering them unable to stop him. (see the video clip below)

Bicycle Smash: Mia Hamm's stunning backflip bicycle kick makes her one of the best strikers around.

Speed Burst: An explosion of pace that will help you catch up to opponents.

Dodge Move: Jump over or go around players quickly with these cool and easy to use tricks.

Check out the new screens below as well...

We talk to Ubisoft at Gamescom

Academy of Champions from Ubisoft 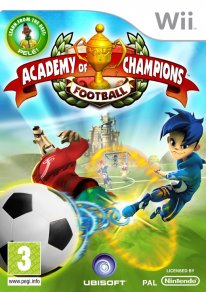