Are you interested in trying your skills in robbing banks, but you haven't got the game for that? Overkill has some good news for you as Payday 2 is free to play for the whole weekend on Steam. If you find it to be a title worth buying, you can then buy it with a 75 per cent discount.

Simultaneously the developer also announced a new DLC that focuses on Japanese organised crime. The Yakuza Character Pack includes a new playable character Jiro and his mask, Yakuza perk deck and a couple of new weapons - a katana and micro uzi. The DLC will be out on August 27th, but you can already see the cinematic trailer for it below (you can read our thoughts on the game as it currently stands over in our Frontline article).

And finally the publisher is pushing out a new patch (74.1). It balances some perks and you can find patch notes under the Yakuza trailer.

Hotfix 74.1 contents
- Fugitive Skill, Bullseye, You generate an additional 30 armor for each successful headshot
- Muscle Perk Deck, 800-Pound Gorilla, You regenerate 4% of your life every 5 seconds. Deck Completion Bonus: Your chance of getting a higher quality item during a PAYDAY is increased by 10%
- Sociopath Perk Deck, Showdown, Killing an enemy at medium range has a 75% chance to spread panic among your enemies
- All Perk Decks, Fast and Furious, You do 5% more damage. Does not apply to melee damage
- Infiltrator Perk Deck, Life Drain, Striking an enemy with your melee weapon regenerates 20% of your health. This cannot occur more than once every 10 seconds
- Crew Chief Perk Deck, Wolf Pack, You and your crew gains 10% more health 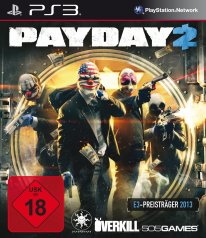