In the weirdest year of the century so far, video games such as Paper Mario: The Origami King have popped up out of nowhere and players are getting to know about them in new and different ways. This game, for example, was unveiled a couple of months ago amidst the strict lockdown ushered in by the COVID-19 pandemic, and that meant a sudden trailer for a game that looked fairly finished, but then there was no E3, no formal presentation, and no hands-on event. That is, up until today, a week and a day before release, at which point I can finally tell you a bit more about my time with the game.

Given the circumstances, though, I have to say that communication about the game has been significantly detailed, with press releases, news updates, and videos about the game telling us much more than we'd usually get in the same period of time. With that in mind, and with the release and our final review of Paper Mario: The Origami King so close, I wanted to share some points from my ongoing impressions after a few hours spent with the adventure.

What we're loving about Paper Mario: The Origami King

We've seen colourful adventures based on paper and other crafting materials over the years (especially in the last two decades with titles such as Tearaway, Yoshi's Crafted World, LittleBigPlanet, or Kirby's Epic Yarn, among others), but you can tell that this is the sixth (!) entry into IntSys's series. The game feels incredibly good from the get-go, combining an interesting mix of 2D and 3D graphics with beautifully stop-motion-like animated characters and environmental effects (and a satisfying controller response, including cool motion-controlled sections). I could say it looks unique despite the old formula, and any action, no matter how simple or irrelevant it might seem, works like it should inside this world, from hitting any element with the hammer to unsticking a trapped character. And I'm also pleased by how the traditional 2D cut-out characters fit with the 3D worlds, the new origami invaders, and the bigger papiermâché enemies.

Thankfully, we're able to forget about the linearity and/or simplicity of some of the more recent Paper Mario games, as this seems like an expansive world to explore full of tiny details and hidden secrets. Big doesn't mean empty, as every section is filled with little things to do, from item collecting to improvised mini-games, silly environmental gimmicks, holes to cover with confetti, and many other activities to keep our interest.

The writing in the first few hours is just brilliant, and I hope it maintains that level of quality throughout the whole adventure as it probably is the best single thing about the game so far. Both kids and adults will keep a smile on their faces (with the occasional laugh-out-loud moment) thanks to the dialogue and the constant flow of ridiculous and fan-servant situations. This has always been different from your regular Mario platformers; it's a trademark humour style that has me completely hooked. A Goomba who is Mario's biggest fan or the muttering from folded-Bowser are my favourites so far.

While keeping the overall game true to its roots to please long-running fans after a couple of detours on more recent platforms, IntSys is using their well-known strategy expertise (Fire Emblem, Advance Wars) to introduce a completely revamped combat system. The studio seems worried about players not getting to grips with it quickly enough as the new mechanics are kept simple and very hand-held early on, but I'm liking the concentric battlefield idea that changes how the different attacks and items impact on enemies based on their positioning. However, I want to see how this evolves in terms of depth and tactics towards the end of the game.

A Few Concerns about Paper Mario: The Origami King

That final positive takes us to one of the things we're wondering about: will The Origami King deliver in terms of RPG systems? Of course, we all know this series takes a light-hearted approach that usually makes it a perfect entry point for RPG newcomers, but with the lack of levelling and significant character progression, well, I fear that we might miss all those addictive traits of the genre after a while, especially if combat becomes repetitive. Will a rising challenge perhaps make up for that? I'll let you know once I've completed the game.

Trying to keep the pace

Despite how the world is filled with little activities, collectibles, secrets, and excellent dialogue, I did find a couple of sections that don't maintain the pace, and this happens as well when you have to enter indoor areas or change environments often, as loading screens break the immersion a bit.

So, with this, before delivering my final review, Paper Mario: The Origami King is looking like a hilarious, dynamic and idea-filled adventure. Based on what I've seen so far, it has to keep both the rhythm and the different systems going in a balanced way to make sure that it doesn't end up being as paper-thin as some of its predecessors, but if they can manage that, I think fans and newcomers alike will fold to the new comedy King.

"Great level design and boss battles are interwoven with some fairly mundane sequences and a combat system that never really gets going."

Paper Mario: The Origami King is up for today's GR Live stream

We're visiting the two-dimensional Mario in the 3D world of Paper Mario: The Origami King on today's stream.

Expect to see more of Paper Mario: The Origami King and something new from WayForward.

Paper Mario: The Origami King has vehicles and an open world

Mario's next paper-based adventure has been revealed, and it's landing much sooner than you might think. 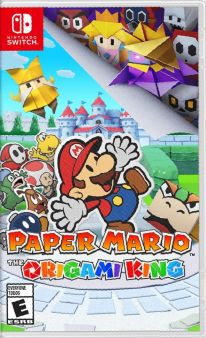