There have been some strange games to receive the battle royale treatment. Between Forza Horizon 4's The Eliminator mode, to the upcoming Worms Rumble, battle royale has become less niche and more a necessity. Somehow, it's even managed to captivate 80s arcade titles as well, because PAC-MAN is back and this time, the beloved character has his own battle royale title - in PAC-MAN Mega Tunnel Battle.

What this game asks of you is essentially to just play PAC-MAN. You will have a maze designated for you of which you can complete to get bonus points and unlock a new maze. Likewise, you will be expected to run from Ghosts, and even hunt them using the Power Pellets, collecting fruits for bonus points along the way. Where this PAC-MAN differs from the rest is how it incorporates multiplayer, as each maze is connected to others, and you can travel between them at certain times to put some pressure on rival players.

Unlike a lot of BRs out there, this PAC-MAN title isn't directly about eliminating or killing your opposition, in fact, what it really asks of you is to out survive your foes. Whether that means simply remaining to yourself, focussing on building up points, evading the Ghosts and completing your own mazes, or alternatively, heading to someone else's maze and getting all up in their face, the choice is yours.

I won't dive too deep into the original PAC-MAN part of this game, because unless you have been living under a rock for the past 40 years and are unaware of the iconic title, it hasn't changed much. That's not a knock on it at all, quite frankly, even today, it's fantastic and is still captivating to play. However, adding an essence of multiplayer gives an extra boost to the gameplay, and it makes it even more competitive and exciting.

You can play passively, for example never leaving your maze, with the focus of simply outwitting the AI ghosts and out-surviving your competitors. On the other hand, you can take a more aggressive approach, constantly looking to invade opposing players' mazes, eating up their points, and even them as well should you get the chance. You only have three lives to play around with, so choosing the right approach that suits your style of gameplay is crucial to success, but with that being said, the feeling of consuming an enemy PAC-MAN is incredibly satisfying and absolutely worth a go.

One of the other newer areas coming with the title are the power-ups, which allow you to change the ways Ghosts and other PAC-MEN interact with you. You can pick up a shield that provides invulnerability upon taking one life-consuming blow. You can make your PAC-MAN smell, causing Ghosts to move away from you. Similarly, you can make Ghosts attracted to you, making for an easy lump sum of points should you acquire a Power Pellet and make them turn blue and squishy. These are just a few examples of what is available, and each offers a new ability to either rush to acquire, or even be wary of in case a rival in your maze beats you to it.

As for the game modes available, PAC-MAN: Mega Tunnel Battle offers a fair few to play around with. Elimination is the typical BR experience, pitting a max of 64-players against one another. Challenge mode on the other hand offers a more retro, arcade-style of gameplay, where the battle royale mechanics are largely shelved in favour of trying to survive for a lengthy period, picking up points along the way. There are still rival PAC-MEN here, although considering how Challenge games tend to roll on for a much longer period of time, I have a sneaky suspicion these are AI's and not players.

To keep gameplay fresh, and to make your PAC-MAN unique to you, there are a series of cosmetics available to be acquired. These can be earned by playing and earning points, similar to how Fall Guys: Ultimate Knockout requires Crowns to buy new customisation options. Admittedly, the options are rather limited right now and are usually just centered on dropping a hat on your PAC-MAN, or changing the look of your maze, however, considering you don't need to pay real money for them, I very much welcome their addition.

The one major catch for this title is its exclusivity to Stadia. Whilst it isn't a pricey game and it generally plays well over the Stadia system (granted I usually run at quite high download speeds), I did notice the occasional hiccup, with lag often popping up. It didn't usually last longer than a second or two, and wouldn't affect gameplay much due to the style of the game.

My main worry with the title is how it is a perfect game to be played across all platforms, and yet it is locked to Stadia. Sure, Stadia works reasonably well, but the number of people who use the system accounts for a much smaller player base than other platforms, and I often wonder how this game could succeed with a broader platform focus.

Looking at PAC-MAN Mega Tunnel Battle as a whole, this title is a really fun arcade experience that blends modern battle royale mechanics with iconic, retro arcade gameplay. However, the issues I foresee with this game revolve around its longevity, as playing PAC-MAN for hours is much less enticing than it was thirty years ago, as the industry has grown significantly. On top of that, being exclusive to Stadia doesn't help its ability to flourish. Does this mean I am not a fan of this game? Absolutely not. For competitive people like myself, this new edition into the PAC-MAN saga is a great way to bring the timeless classic to the modern-day, and it might even spur some of your older relatives to have a go with you.

Gamereactor UK
+
Builds fantastically on an already brilliant concept. Gameplay is tight. Customisation adds personality to the title.
-
Longevity is questionable, as PAC-MAN is not as engaging over longer periods as modern titles.
is our network score. What's yours? The network score is the average of every country's score

The PAC is back.

The iconic arcade character is back with a brand new game to celebrate his 40th anniversary. 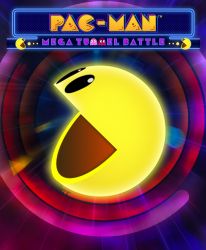