During this year's Gamescom, we took a look at Zordix's upcoming off-road racer Overpass. Whilst we were there, we also spoke with Joakim Eriksson, producer on the title, to see what makes this racer so unique against the rest.

"When you play it, it will not feel like any other racing game you play" said Eriksson. "We don't focus on driving fast or putting the pedal to the metal but it's more on technical driving, like having the right amount of speed and using skills to get past obstacles."

"We really wanted to do something different, so that was the key element. We didn't want to make just another racer, we wanted to do something that requires learning and has a skill depth to master. I think this is one way of doing it and we have received a lot of positive feedback from those who have tried it and yeah, I think it can bring something really new to the genre."

We later asked Eriksson about the competitive aspects behind the title. He responded with; "You only race one at a time, but you always have a time to beat. We're going to have world rankings and leaderboards and I think it's going to be a lot of competition, like who can make the best time because every track has many different solutions. So, there are many roads and I think the community, or the players will find new ways to make faster times than we didn't think of."

Overpass is looking to release in February 2020, coming to PC, PS4, Xbox One and Nintendo Switch.

What do you think of Overpass's racing style?

"It tries to do something different and we applaud the intention. That said, it felt a bit too lonely and frustrating at times."

We're getting behind the wheel of Overpass on GR Live today

If you want to see the intriguing new off-road racer in action, we're going to start up the engine at 3pm.

We got to chat with Zordix's Joakim Eriksson about their upcoming off-road racer Overpass.

Overpass isn't just about speed, "it's about exploration first"

You'll be driving around the mountain when this novel new racing game lands later this year.

The upcoming racer will be landing on PC and consoles later this year, featuring plenty of licenses and action-packed races. 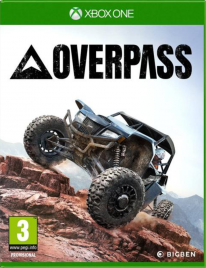