Yesterday brought great news out of the UK because the small team at Ghost Town Games has revealed it will release the first two Overcooked titles in one single complete edition later this year for the next console generation. The original title receives a technical update so that it looks closer in quality to Overcooked 2 while displaying 4K resolution in 60 fps and allowing online multiplayer at the same time.

Prepare yourself for a pumped-up package with over 200 levels, which can be played crossplay with the players from the other next-gen platform. In addition to the familiar content, newcomers can expect more options in terms of difficulty, which Team 17 is calling "Assist Mode". With this, the game will be less stressful because we have more time to complete recipes, among other things. Also, there will be a few more surprises, so the package will be even fuller.

We don't have a specific release date yet, but since neither Xbox Series X nor PlayStation 5 have one so far, there's no rush. It is not known whether Overcooked: All You Can Eat will also be available for the current platforms but you can compare how much nicer the party game looks on the next generation in the pictures below. All further information is available on the official website at Team 17.

Overcooked! All You Can Eat is being served up soon on Switch, PS4, and Steam

March 23 is the exact date.

The Swedish chef from The Muppets is now a playable character in Overcooked: All You Can Eat

Overcooked 1+2 with all DLC releasing for next-gen consoles

The game will run at 60 frames per second in 4K resolution while benefitting from shorter loading times.

Overcooked: All You Can Eat 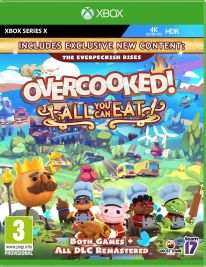