Outriders quickly became a big hit for People Can Fly and Square Enix and seems to have both sold a lot while also being very popular on Xbox Game Pass. The launch was rocky though as the game suffered from several technical issues.

Fortunately, most of these were fairly quickly sorted out and the updates nowadays are more about improving the game in various ways rather than fixing bugs. Now another patch has been released, and once again, general quality of life enhancements are the main thing.

The most notable difference is a 100% bigger chance of getting legendary loot, and also less risk of getting items you already had. Check out the full patch notes below the image.

• Legendary Anti-Duplication System implemented
- This system will mean that if a character has an item in their inventory or stash and a duplicate item is rolled, the dropped item will be re-rolled once.
- Note that this system does not guarantee that every drop will be unique. Rather, it is designed to provide a second roll at avoiding a duplicate.

• Scripted Boss Loot (Chrysaloid, Yagak) are now able to drop all non-class specific Legendary Helmets
- This change will improve the variety of items in the Campaign.
- Previously, these bosses would only drop a selection of Legendaries (the same pool that was available in the Demo as well as the Cannonball Helmet).

• The Luck system has been improved and players should no longer experience very long droughts without a Legendary item dropped during endgame.
- The base scaling of Legendaries dropping through higher difficulty levels still applies, so you may will still want to farm as high as possible.

General Patch Notes
• [CONSOLES] Added extra options and settings for controller customization including Deadzones, Look Sensitivity, Acceleration and Legacy layouts
• [XBOX] Improved Sign-in Times
• [EPIC STORE VERSION] Fixed an issue that was preventing the pre-order Hell's Ranger gear from unlocking as intended
• Made improvements to multiplayer connectivity
• Earthborn Gear / Hell's Ranger DLC equipment can now be scrapped
• Fixed an issue that was causing old inventory items to be marked as new.
• Fixed a bug that prevented players from running if they were stunned while using the Trickster's Cyclone skill.
• [EDIT for clarity] Fixed a bug that allowed a combination of two closely timed attacks to result in visual one-hit kill on players, from Alpha Perforo's and Behemoths / Brood Mothers
• Fixed a bug that caused the Scrap Grenade projectile to be blocked by dead enemies.
• Fixed a bug that caused Feed the Flames' Ash effect to not trigger properly in multiplayer.
• Fixed a bug that caused Weapon mod 'Ravenous Locust' to not deal damage if used together with the 'Weightlessness' mod.
• Mitigated an issue whereby players could get stuck in an animation after using Gravity Jump in multiplayer.
• Crash Fixes.

Extra Note
We'll have more news of the second run of the appreciation package very soon and will deploy it when we've run a few more tests on it. We're hoping for it to be ready by Thursday but we'll confirm this on the day.

The upadte is live now.

Outriders is also on track to become Square Enix's "next major franchise".

It has fixed a bunch of bugs.

Square Enix: Outriders is on track to be our next major franchise

And it has over 3.5 million unique players. 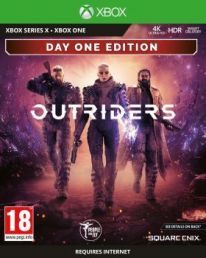