If No Man's Sky and Elite: Dangerous taught us anything, it's that space exploration games can, due to their size, struggle to remain truly compelling. If a yawn-inducing gap of infinity is to be the framework, there's only so much content you can distribute before having to abort the mission of filling the world evenly with content. Do we really need an entire galaxy to explore right off the bat?

Perhaps this is a question the release of Star Citizen can answer if that ever happens, but until then, Mobius Games gives the genre an honest attempt with its unique take, an adventure game called Outer Wilds. Comparisons with other titles are not to be avoided, however, because it's in the noticeable absence of what one usually finds in space exploration where Outer Wilds really excels.

There's no universe stretching into eternity to explore, instead, the player is treated with a reasonably sized solar system of visually stunning planets. There are no rival pirate factions there to ruin your day or space battles to dodge, just dangerous and treacherous terrain to explore in the search for answers. There are no detailed depictions of the panels, cannons, lights and screws in or outside of your spacecraft - instead, the player pilots a rickety, oversized structure made up of planks that almost looks like something out Sea of Thieves.

You play as one of the explorers at Outer Wilds Ventures, a group of explorers and archaeologists looking for the Nomai. You're not looking for survivors, and these cards are laid out on the table from the start. In fact, Outer Wilds is, if you don't count the platforming and the exploration, a document hunting game in a way. What's so impressive about that is how the game distracts you from its true nature.

You see, your objective isn't just to land on a planet and explore it - each celestial body has its own conditions, rules and regulations for exploration. In some places, gravity is stronger, making platforming sequences heavier and more treacherous. Other places need to be explored little-by-little due to ever-changing weather- or structure conditions that adds a ticking timer to keep track of during your stroll on the surface. The game offers incredible variation and therefore never gets boring and always keeps you on your toes, especially when you realise what's waiting for you in the dark.

While on the topic of ticking timers; you'll probably wonder why you suddenly die throughout the game. You have twenty-two minutes to collect as much information as you can, whereupon the sun enters a supernova, swallowing the entire solar system before you wake up again like nothing happened, safe in your sleeping bag. This may sound tedious, but the information you collect is saved aboard your spacecraft ready for the next run. Outer Wilds truly does a great job of letting the mystery of its world and document-based narrative lead the player further.

The soundtrack is also quite amazing (you can listen to it on Spotify if you wish). At the beginning of the game, you are looking for members of the expedition as an introduction to your information gathering. This is done by directing your signal tracker in whichever direction until you find something interesting, capturing individual's instruments from afar. Maybe you'll hear a lonely banjo around a campfire or deep in the darkness - the use of instruments is surprisingly effective when it comes to setting a tone for what you may find. The title track and the ominous tunes that come before the supernova devours you and everything around you whole are also masterfully composed.

What goes up must come down though, and Outer Wilds, like any other game, has some flaws. The main issue we had with the game was the lack of narrative structure, themes and memorable characters. The story feels scattered through dimensions when one has to explore non-linearly with no real guideline as to where to go next for cohesion. You get your information through reading and not via voice acting, and so the Nomai, as we get to know them, all start to sound the same with their heavily science-clad language and therefore could have benefitted from an audience surrogate character to ask questions.

There's also little to no replay value in Outer Wilds. Once you've explored what you need to explore and the mystique is gone, there's really nothing leading you forward. You can't pretend to not know what's coming to stretch the experience out since it's a bit like feigning ignorance at your own surprise party when you heard something about in advance.

Of course, the flaws are tiny flaws at best, because you don't play Outer Wilds for its characters or narrative, but for the fantastic adventure and all the wonderful places you get to explore. By stripping down the vastness of the universe, Mobius Games has managed to create something more special than games No Man's Sky and Elite: Dangerous were able to with infinite worlds at their fingertips. The moral of the story is simple - bigger is not always better.

Gamereactor UK
+
Makes you feel like a true adventurer, great soundtrack, mechanics offer great variation, unique planets to explore, unique level design, the threats of the game are genuinely scary.
-
Weak storytelling, bleak characters, lifeless universe.
is our network score. What's yours? The network score is the average of every country's score 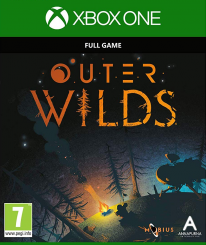