The Microsoft press conference at E3 was well received and predictably full of major franchises and blockbusters. But there was also one or two games that stood out as different. One such game was Limbo developer Playdead's Inside, another one was Moon Studios' Ori and the Blind Forest.

While a metroidvania style game is nothing new in itself, the visuals and attention to detail certainly made the game stand out. It certainly offers that immersive sense of being transported into another world. Much like Child of Light did, Ori and the Blind Forest comes across as a playable fairytale, but while the comparison can be made on the surface from our brief hands-on with the game it feels much deeper in its premise, a true metroidvania game if you will. Unwilling to divulge much of the story writer and designer Thomas Mahler told us:

"You play Ori who's a forest spirit. And he's on this journey of self exploration and he has to find more about himself. It's a bit of a coming of age story. It's definitely inspired by Disney films. But I don't want to give too much away today."

Ori and the Blind Forest is in development for PC and Xbox One and Microsoft is publishing the game so don't hold your breath for a PS4 version.

"We had to keep the game secret for four years before we actually showed it to people today," says Mahler. "So it's super exciting to have people playing the game finally."

"We are a virtual studio," explains Mahler. "We have people all around the world. We just basically picked the right people for the jobs. We have people in Australia, in America, all over Europe, and so on, to just come together to make this game."

"We grew up playing games like A Link to the Past, Super Metroid, and it always bugged me that we never really have games anymore where I felt the same kind of feeling as I did as a child when I played these games. So that's what we wanted to recreate. The idea was can we give people that feeling again? And hopefully we succeeded in that."

Thomas Mahler was passionate about how Ori and the Blind Forest is a true metroidvania, and while not naming the titles he feels just casually slap on a "metroidvania" tag without truly being that kind of game, we did get the feeling that perhaps he was referencing Child of Light.

"When it comes to a metroidvania, it's extremely difficult to design a real metroidvania. There has been a lot of games recently that have been fairly linear, then slap a map on top of it and call it a metroidvania. And that's not really doing the job. We've been designing [it] from the ground up to become one of those games where everything is connected. There's no loading time in the game ever."

There is an analogue preciseness the platforming in Ori and the Blind Forest. It's not just about running and pressing the jump button at the right time, you need to hold it down to get the most out of your jump. Enemies appear to require a little bit of tact and finesse to deal with, even if during our session we were content to just plow ahead irregardless of consequence (it's just meant for us to get a taste of it after all).

There is attention to detail in every little seemingly insignificant object on screen. It gives the game a surprisingly tactile feel, and it certainly helps immerse the player.

"We took those core elements and we tried to push the 2D gameplay forward on all levels. The platforming - we tried to make it absolutely pixel perfect. Obviously we were inspired by things like Super Meat Boy and anything that pushed platforming forward an tried to improve on everything."

"We probably spent over 1.5 years just to perfect the controls. Again we've been working on this thing for four years just to give people an absolutely polished game."

There is also a light RPG element added to the mix, and while we didn't get to sample it in game, Mahler had this to say:

"I always liked what Konami did with Symphony of the Night. They took the metroidvania formulaand then added RPG elements on top of it and it worked surprisingly well. We really wanted to take that a step further. There is a level up system, but then the player can also directly decide in which direction he actually wants to change his playstyle."

Overall, we came away impressed by Ori and the Blind Forest. It certainly builds on the legacy of some true classics, but it also appears to have enough unique appeal of its own to keep our interest. It certainly stands out among the other Xbox One titles due out this fall. 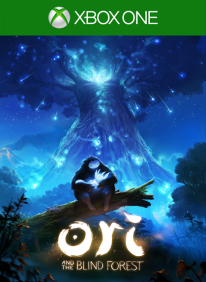