Alternate realities? They're a fertile breeding ground for fiction writers. The simple premise - altering a key moment in history and thereby changing the future - gives basis for a world (or several parallel ones) of opportunity.

The theory isn't hard to get your head around, and has probably formed the basis for debates with friends in the past; the most prominent "what if?" in years being "what if Hitler died as a child?". A single person dies before their time, yet the ramifications are huge, and would alter the world as we know it.

In the world of fiction, such stories are a dime a dozen. Marvel's X-Men take a vacation in parallel existences every few years. Hell, television show Sliders did it every week, basing its whole concept around one central idea: changing the future through altering a key moment in the past.

The recent Star Trek film dealt with the same possibility; a single flash point altered the course of events in the universe completely. It not cleaned the slate from forty years' worth of television series continuity, but also gave the franchise some creative freedom.

Alternate universes can also be treated as an effective (if sometimes cheap) get-out clause, giving writers wiggle room where continuity, and fans, would likely strangle them.

Set in the same time period of Resident Evil 2 and 3, Capcom has hinted that the title will give fans "the chance to rewrite the history of the Raccoon City outbreak" and specified at least one character of that time period, Leon S Kennedy is on the hit list of an elite squad of Umbrella operatives (that's you) sent in for reasons unknown.

While this could mean simply a Left 4 Dead-style finisher that lets you choose who dies, that the creator is toying with altering one of gaming's iconic and memorable titles shows there could be consequences that'd ripple out and effect others in the Resident Evil cast. Capcom can think outside the box. No-one is safe - not even established faces.

A character who dies here isn't therefore elsewhere to rescue someone else, and so on - potentially meaning huge changes to the future of series due to a single bullet aimed just right.

Given three principle characters of the series are in and around Raccoon City during this timeframe - alongside Leon is both Claire Redfield and Jill Valentine - that's a lot of variables that could heavily influence future installments in the series.

It's a direction Capcom could mine heavily if the game sells well enough to grant a sequel. And if this is a company eager to try something new with the franchise, its an intriguing spin for fans and safer for the company than doing a straight reboot (see DmC). It's all theory for now, but what would ensue if Capcom's brave enough to follow through on the potential of a darker world where Umbrella wins?

Let's look at the facts, and what could ensue. First, a refresher course in R.E. history.

Resident Evil 3 actually bookends its predecessor, set as it is before and after the events of Resident Evil 2, though both games are set in Raccoon City during the T-Virus outbreak.

The third game follows Jill Valentine as she attempts to escape the city as the zombie plague tears through it, with this first part of the game set twenty-four hours before the events of Resident Evil 2.

She meets and ultimately works alongside Umbrella operative Carlos Oliveria to escape and defeat Umbrella's specially mutated Tyrant, Nemesis. During one encounter Jill is infected with a virus by the monster, with her collapse and recuperation sidelining her while the events of R.E 2 take place. During this time Carlos heads to Raccoon City Hospital to find a cure.

Its here, as the zombie infection has finally decimated the city, that Leon S Kennedy chooses the worst day to start his career as Raccoon City Police Officer. He stumbles into Claire Redfield, who's looking for her brother Chris.

They in turn, come across Sherry Birkin, daughter of Umbrella scientist-turned-bioweapon William Birkin, and Ada Wong, an agent working for another company intent on retrieving Birkin's superior version of the T-Virus, the G-Virus. They're pursued by a trenchcoat-wearing Tyrant but ultimately the four escape the city.

Meanwhile special Umbrella agent Hunk is sent in to retrieve the T-Virus for the company and escape to a nearby extraction point, and a large, knife-wielding piece of Tofu runs amok on the city streets. Seriously.

Elsewhere in the city the events of online multiplayer PS2 title Outbreak occur, as terrified residents of Raccoon City take up arms and try and exit the city.

A short time later Jill recovers and makes her own escape alongside Carlos in a helicopter piloted by ex-S.T.A.R.S colleague Barry Burton from the city, moments before its obliterated by US Government-santioned missile bombardment to stop the infection's spread.

Refreshed? Right. Here's what we know so far about this newest Resident Evil entry.

From the teaser trailer, we know Leon will appear in Operation Raccoon City, and, from gameplay footage we've spotted, the trench-coat wearing Tyrant. It wouldn't be too far-fetched to say the principal characters outlined above all make an appearance somehow. It'd be too good an opportunity to miss, and they could form the basis for either boss fights, such as Birkin's mutated form, or random encounters as the Umbrella squad sweep through the city, Rainbow Six-style.

So, let's swing on that teaser's hook. Assume Leon bites the bullet. Because that'd be a real kick in the teeth, rug pulled from under you, "I see dead people"-type shock.

If so, the domino effect begins immediately, because what you quickly realise stacking things up, is that Leon is key for a lot of plot progression in the series. For Resident Evil 2 however, those repercussions vary depending on when he's killed.

Let's say he's taken out of the equation early. Early enough that he's not there to take a bullet for Ada Wong. The bullet finds its mark, the secret agent dying at the hands of Annette Birkin, Sherry's mother.

That's one. And the kill count just keeps growing.

Faced with both a psychotic Annette and William chasing after their daughter and without back-up, Claire's killed trying to protect Sherry. The infected kid is captured, along with her golden pendant carrying a G-Virus sample, by her rapidly-mutating father.

Yet William, one of Umbrella's key personnel and creator of the G-Virus, is eventually killed by the Umbrella special forces team, under pre-mission orders of Albert Wesker, who sees a way of strengthening his control of the company, and so the mutating Sherry is captured and transferred to a separate facility off-site.

After cleaning up the streets of both infected and survivors, the team come across Carlos Oliveria at Raccoon City hospital. The encounter destroys the hospital's labs, and, outgunned and outmatched, Carlos is killed.

With the G-virus sample captured and all other sensitive material retrieved, the team head to the evac point...only to come across a humanoid bean curd swinging a knife. Its a short fight, and the easy target becomes an after-mission snack. In case you were wondering, it tasted delicious.

The team leave as the US government fight jets soar in. Unable to move as she fights the T-Virus that's ravaging her body, Jill Valentine is just another statistic in Raccoon City's complete destruction by the government's missile strike.

One well-timed bullet, and a vast selection of the cast is wiped out as a result.

And thus Slant Six and Capcom are relatively free to forge a whole new sub-series of Resident Evil games and force an entirely new direction for the franchise. Don't believe us? Look at this:

With Claire killed, there's no-one to stop Wesker's attempt at securing the T-Veronica virus on Rockfort Island, as outlined in the events of Resident Evil: Code Veronica.

And because Claire is no longer alive there's no reason for Chris Redfield to be there. Besides, Leon's dead, therefore there's no-one to tip off the ex-S.T.A.R.S member something is a amiss on the island.

And because neither Redfield is there to interfere, Wesker comes across Alexia and Alfred Ashford, the children of one of Umbrella's co-founders, alone. But he's got his own backup bioweapon: the now fully mutated Sherry Birkin, more than a match to combat and kill the T-Veronica virus ridden Alexia, while Wesker murders her brother.

Nearly unopposed now, Wesker goes on to try and secure control of Umbrella rather than continuing working for as a double-agent for a third-party, making contacts with various governments and organisations round the world to help fund his work.

One such group is Los Illuminados, the cult based in Europe which in another timeline would have been destroyed by a now U.S Secret Service agent Leon Kennedy. Ever eager to have complete control, the blonde-haired villain sends in his Umbrella squad to seize control of Las Plagas.

It's the perfect opportunity and location to wheel out a sequel to Operation Raccoon City, the events of Resident Evil 4 perfect to revisit from a squad-based shooter perspective. Small villages, winding canyon paths, and a island facility would offer a decent range of areas to test Slant Six's chosen gameplay mechanics.

Wesker fights for control of Umbrella against its last surviving founder - Ozwell E. Spencer, but in a far more direct fashion than in the current continuity, that sees him testifying against Spencer in court to bring down the corporation.

In this timeline, they pit bio-weapons and operatives loyal to each against each other, as Spencer falls back to his mansion located in Europe.

That'd put the conflict awfully close to where a special Umbrella squad of crack operatives were just winding down their previous mission. Perfect perhaps, for a trilogy closer.

Inserted close to the Spencer mansion in Europe, the team would have to skirt the forests and valleys leading to the mansion, before working their way through its interiors and deep into the research facility buried beneath it to assassinate Spencer. Again, a good mix of locations to test the skills sets of hardened soldiers.

However, not only would they have to directly contend with rival Umbrella soldiers with the same specialist training, but they'd also have to combat the trio of Chris Redfield, Barry Burton and Rebecca Chambers, the last survivors of Raccoon's S.T.A.R.S, who have spent the last few years tracking down those responsible for the Raccoon City incident and are seeking revenge for the deaths of both their teammates and Chris's sister Claire.

It's familiar faces in a different world. Like we said - one bullet can alter the course of a franchise's future.

Its doubtful that Capcom would thread the story as outlined together quite like this, but its gives an example of how much freedom of choice Operation Raccoon City could give to the series if handled right. Reason enough why the game is such an exciting prospect, besides the Resident Evil-does-Operation Flashpoint genre-blending.

Don't let this all ruffle your feathers though. Again, this isn't a reboot of the series ala DmC, but an alternate take alongside the 'regular' world of Resident Evil, which continues with the 3DS release of Revelations.

Still, its got potential. 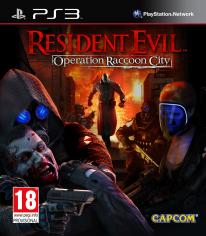