I first came into contact with Ooblets when developer Rebecca Cordingley shared a GIF on Twitter of a character breakdancing. Next to him was a strange creature that looked like a mushroom. Over the next few months, more and more curious pictures and videos from the brightly coloured world of Ooblets followed, which ultimately turned me into one of the many fans of Glumberland's debut game. Last week the project landed in Early Access and I was finally able to try this unique game for myself, which replaces battles and disputes with dance competitions and strange words.

Our adventure starts in the small town of Badgetown. When you first arrive, a bizarrely dressed girl, Mayor Tinstle, introduces herself in a strange language, a language that accompanies us throughout the entire game. A look around the small town reveals a picture-perfect place full of merrily dancing characters, squeaky music, and small creatures - the eponymous Ooblets. Ooblets is a game that proudly reveals its wacky nature and it never takes itself too seriously.

You start your journey with a small, rickety hut and a devastated field. In Ooblets, your first priority is the cultivation, maintenance and sale of the products that you grow. Similar to Harvest Moon, you can buy and plant seeds, cultivate your fields, and then sell your produce. Every physical activity costs energy, but you can replenish it quickly by taking a little nap or grabbing a snack. That's one part of the game, but Ooblets is also one of those games in which you catch little creatures that are needed to compete with other people, this time in dance competitions.

It might sound like Pokémon, but there is no trace of life or death battles here. Instead, you impress your opponents with dashing dance moves. You can select your first dance partner when joining one of the four clubs in the game, a setup comparable to the moment when you choose your very first Pokémon from the three available Poké Balls at Professor Eich's place. In this game, however, the club determines your starter Ooblet. These clubs are based on stereotypical character types: where the Peaksnubs present themselves as cool loners, the Mosssprouts feel particularly connected to nature. In gameplay terms, your choice does not have a particularly big impact, as you also get access to the other clubs' Ooblets later on.

After you have chosen a pint-sized partner, you can throw yourself directly onto the dance floor. The competitions are somewhat reminiscent of a snug round of Hearthstone; in a turn-based exchange you play a set of cards and the beats indicate the number of moves you have left in your turn. Instead of defeating your opponent, it's about who gets a certain number of points the fastest. Different dance steps increase your score but there are also cards with which you can dismiss opposing Ooblets for a brief moment or even steal some points from your opponent.

With every win, your Ooblets receive experience points, which in turn boosts the level of your dancer. Each time you level up, new cards are unlocked for the associated Ooblet class. So far, the dance competitions have been a very small, albeit entertaining challenge. Unfortunately, you're currently unable to put together your own sets of cards, but I can well imagine that the complexity of the competitions will increase considerably over the course of the game's early access development.

The developers are particularly successful in mixing the farming and creature-collecting genres with each other. If you win a dance competition, you can get a seed from an opposing Ooblet. If you plant these seeds in your field, a new creature will grow in a few days. Because you equip your Ooblets with cool accessories, give them a name, and even let them help out on the farm, these small, cute critters not only feel like something you need to help you shine on the dance floor, over time they also become part of your strange but lovely little family.

Behind the visually minimalistic style hides a whole heap of content, which can easily keep up with games such as Harvest Moon or Animal Crossing. The expansion and decoration of your house, the completion of tasks to further develop surrounding areas, cooking, fishing or even the crafting of new objects - these are just a few of the activities that await you in the world of Ooblets. The two areas that are available in the current build are Badgetown and Mamoonia. You can get to Mamoonia after repairing a hot air balloon (which serves as a fast travel system between the two locations). That leads me to assume that Glumberland will have many more areas and associated Ooblets for us to explore in the future.

Pokémon, Animal Crossing and Harvest Moon: I am a big fan of games like these, games that are less about skill and more about a relaxed atmosphere where I can set the pace for myself. With Ooblets, Glumberland manages to combine a range of diverse features into a coherent and wacky world. There are also new influences, such as the turn-based dance competitions, which further expands the cosy overall experience. With just two accessible areas, however, the scope of the game is so far limited. Still, I'm looking forward to seeing how Ooblets unfolds in the future; I can't wait to discover new cities, catch more Ooblets, and learn new dance moves to amaze my opponents.

The early access version of Ooblets will cost you around £20 on the Epic Games Store. A Steam version and an Xbox One version will also follow, but there is no firm date on when that will happen just yet.

Ooblets just got a Winter Update!

An adorable penguin-like Ooblet makes its debut within the new update.

It won't be long until players can explore the Halloween-inspired world of Nullwhere.

Ooblets to release as an early access title in two weeks

We don't know what this game is all about just yet, but, whatever it is, it sure is wrapped up in an adorable package.

Ben Wasser reveals the extent of the abuse they've received, as well as explaining why they've responded in certain ways. 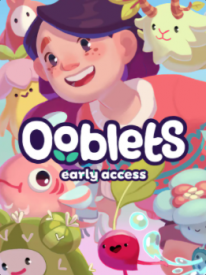