Death is the only guarantee we all have the day we're born. Thus, death is a subject that every human culture has touched upon in one way or another. How we face death, what rituals we perform and how we cope with the loss of loved ones is a fascinating socio-anthropological topic regardless of the culture that's being observed. This is also the premise of Oninaki, the third and latest game from Tokyo RPG Factory.

The little Japanese studio released their first game, I am Setsuna, back in 2016. The focus then was to create a new JRPG where the main inspiration was drawn from classic game Chrono Trigger, a project that was mostly successful with its engaging combat system, melancholic mood, and a beautiful piano score. Their second game, last year's Lost Sphear, felt more like an uninspired sequel where too many assets were being recycled without adding a creative touch and some soul. The question preceding Tokyo RPG Factory's latest game is, therefore, whether the third time is really the charm, but unfortunately, most of the curves are pointing in the wrong direction with Oninaki.

In Oninaki we're introduced to a world divided into light and shadow, where the living exist in one world and the dead in the other. The realm is obsessed with reincarnation and putting the dead at ease so that they may wander on to the next life. The living are told not to mourn the dead, as this may cause the dead to regret their own passing and linger on, causing them to become lost or even turn into monsters. You play a character called Kagachi, a Watcher with the ability to travel between the two worlds, and his job is to make sure that lingering souls can come to terms with their own deaths and move on.

The setting and premise for the story are quite interesting. To suppress the strong emotions that arise when faced with loss and death is of course very unhealthy for body, mind and soul, and having a whole nation built on the premise that death shouldn't be mourned is definitely a good starting point for an intriguing JRPG story. However, it never becomes anything more than a nice idea for a deeper game, and the whole story is dragged down by poorly written dialogue and a plot that rushed through from one chapter to the next with little consistency.

Having the most boring dramatis personae in the studio's history certainly doesn't do Oninaki any favours. This was one of the key elements in I am Setsuna, and even Lost Sphear had a likeable and relatable character or two. Oninaki has little to offer in this respect. Kagachi is dryer than a desert, and the supporting characters aren't much better. Most come and go without ever making an impression on the player, and a JRPG without a memorable cast is a sad thing to witness.

If you love RPGs with big, open worlds with nooks and crannies to explore where you can find unusual and unique quests where you least expect them, Oninaki is not your game. In fact, the world doesn't have an explorable world map at all, and every area visited in the game is more or less linear. You can always swap between the worlds of the living and the dead, but since this doesn't involve much more than a pallet swap, the change in scenery isn't all that great. On the plus side, most of the areas visited have nice scenery, which brings the game's beautiful artwork to life. The characters, on the other hand, are quite bland and shallow visually, which ironically illustrates their personalities as well.

The game's strongest card is the combat system, which can keep you entertained for a while. Every Watcher may ally himself or herself with beings called 'daemons', dead souls without memories of their pasts that are neither lost nor damned. Every daemon has a different skillset and weapon, and Kagachi can always have four daemons equipped that can be swapped mid-combat with the right analogue stick. Finding your dream team of daemons and swapping between them at the right time is important if you're to succeed in combat, and even though the fighting become repetitive in the long run it's still a good system for an action-RPG.

Though the new combat system works well, it's strange that this has been a focal point for Tokyo RPG Factory, considering how well combat worked in their previous games. Other aspects that needed more improvements such as pacing, variation, characters, story and graphics haven't received the same treatment, and have rather taken a turn for the worse. Even the music has become forgettable and soulless, which might be due to a change of composer (the young and talented Tomoki Miyoshi didn't return to the task for this game). Sure, there are a couple of good tracks, and one of the boss themes, in particular, reminds us of the musical style in the anime series Fairy Tail, but the score as a whole doesn't impress.

Oninaki could have been a great JRPG, but a poor script and dull characters make the whole thing a monotonous and repetitive affair. Sadly, third time is not the charm in this case. It appears Tokyo RPG Factory has become a mass producer of mediocre RPGs rather than the connoisseur of modern classics that they set out to be five years ago. This is both sad and baffling, considering that Oninaki has been produced by none other than Takashi Tokita, the director of Chrono Trigger itself. At present, however, Tokyo RPG Factory must be considered a one-hit-wonder. 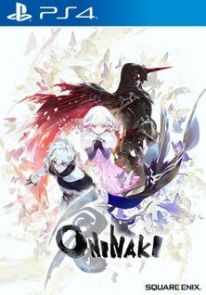