As we wandered into Square Enix's London office the first thing we noticed was a giant Chocobo. There she stood with her baby, and from this landmark, we knew we were in the right place. Shortly thereafter we were ushered into a room to take a look at the new game from Tokyo RPG Factory, Oninaki.

While many RPG fans will be waiting for the Final Fantasy VII: Remake to land next year, what we saw of this new title looked really promising and may well help ease the wait. Oninaki is shaping up to be a deep and emotionally charged RPG - at one point during the demo, we found ourselves almost moved to tears.

We are not going to ruin any of the narrative for you, but it's safe to say that this is a story that's going to pull on your heartstrings. What we can tell you is that by the time you're reading this article, the same demo we tried should be available on the PS Store. So, while you're waiting for that to download, you can read about our first impressions right here first.

More specifically, the demo comes in two parts: a battle mode and the story. We suggest trying both to get an idea of what's going on ahead of the game hitting store shelves next month, when it'll arrive on August 22.

The protagonist of the game is a grumpy man called Kagachi, a 'watcher'. Watchers can interact with the trapped souls of the dead, people who have failed to cross over and therefore have not been reincarnated. We're not going to go any deeper in terms of the story, but you can tell from words such as 'souls', 'dead' and 'reincarnated' that Oninaki is trying to offer a deeper type of narrative experience for players to sink into.

Watchers have the power to cross from the 'living world' into the 'world beyond', where everything is just a little bit more dangerous. There are monsters in both dimensions, but in the world beyond every hit that lands is a critical one. There are different paths open in both worlds, so it is vital for you to keep crossing over. We really liked this feeling of switching between dimensions, as this simple change means a very different experience and adds an element of contemplation to the game.

If you just played through the story demo you might be forgiven for feeling like the combat is a little bit on the limited side, but luckily the battle mode gives you a fuller experience, which is just one level for you to hack your way through. Kagachi himself only has one real attack move, but he is accompanied by up to four daemons, each of which has their own range of attacks (these daemons are trapped souls who have failed to cross over). They can be leveled up and their backstories can be unlocked while you play.

During the story demo, only two of theses daemons were available, and they only had a couple of moves. It wasn't until we jumped into the battle mode that we saw what they were truly capable of. We'll be able to call upon four upgraded daemons, and as we cycled through them, using special moves and different attacks, or fears of limited combat were allayed. In short, the more action-packed parts of the game seem to gel well with the narrative, and while we initially hoped that it might be turn-based, what we played turned out to be pretty satisfying.

This emotionally-charged role-playing game has the potential to deliver a deep and moving story, and based on what we've seen so far, it looks like it's going to be a lot of fun at the same time. Other things we noticed during our time with the game was the stunning graphics and the music the game had to offer - Oninaki has an anime style with great textures and lots of colours.

It also offers a classically-inclined visual style, with the whole thing playing from a top-down perspective. As you run around towns talking to people, or fast-traveling to areas to hack and slash your way through monsters, you'll note a deep and rich stylised world. Finally, the music fits perfectly with the visual style of the world, with its moody and atmospheric notes.

The full game will offer both the aforementioned story and battle modes, and from our time with the game so far, we're certainly intrigued by the prospect of playing more, and that's always a good sign. Oninaki is heading to PC, PS4, and Switch on August 22, and based on the demo, it's definitely one to watch. 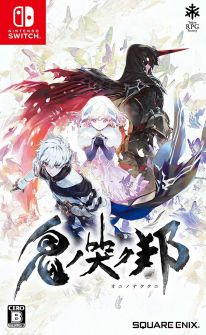