On a planet not too different from ours, superheroes make a living fighting monsters and other threats. One of these heroes is Saitama, the titular One Punch Man. He started out as the below-average Joe, just like we did, with a head full of hair and a 9-to-5 job. After losing that very job, however, he found himself between a monster and its next victim. Faced with the decision to intervene or let a kid die he chose the former. In the bloody aftermath, he emerged victoriously and found a new ambition - to be a proper hero (just for fun, of course).

After training so hard that all his hair fell out, he got so strong that he could defeat any foe in his path with one punch (hence his title). Now he's depressed since nothing challenges him anymore.

Saitama is great and all, but a new hero has arrived, with their own ambition to rise to the very top of hero-dom. That's us! We start the game by making our very own hero from scratch. As is customary, the customisation options are a bit limited. Still, we managed to put a little something-something together.

A short and awkward introduction later and we're off! The game itself seems to be of the third-person action-RPG kind. If you're familiar with the Naruto: Ultimate Ninja Storm games you'll already be familiar with the concept. Run around; take on side-missions; fight in a 3D-environment; find some secrets. It all seems awfully familiar, and one could wonder if Bandai Namco has found a nice little niche for their animé-video game adaptations.

What makes things a bit more interesting is that you're playing as your own create-a-hero, rather than the series' protagonist.

We muck about for a while before kicking the story into gear, and we're playing alongside the manga storyline. A couple of small-time crooks come and go, and we dispatch them with ease. We help a 'salaryman' deliver some documents - but hark! All of a sudden a super-powerful monster appears. Since we're only a lowly C-rank hero at this point we receive strict orders to avoid the action and instead help with the evacuation effort. But lo and behold, due to some plot-related reason we all of a sudden find ourselves in the monster's path.

We're told that we can expect backup during the fight. A window appears, containing a countdown and an approaching hero. After "VACCINE MAN" (Mother Earth's apostate, a consequence of our rampant pollution, come to reset Earth and give it back to nature - yes, all the backstories are equally silly and we love them) beats us to within an inch of our life we're told that a bald caped crusader is approaching. It's Saitama himself, and after he arrives we're allowed to take control of him.

The fight ends as expected after a single punch. It's made painfully clear that there's a mountain of difference between our hero-to-be and the legendary One Punch Man. There are a number of heroes (from the manga and animé) that can back us up in this fashion. We have an influence-value, affecting the rank of the hero backing us up. It's a fun and random mechanic, and we had to laugh a bit when Saitama himself showed up to put a purse-snatching to an instant stop during a side-mission. Overkill to a T!

Sometime later we've played through a bunch of story- and side missions and we unlock the online-functionality of the game. If you choose to connect to the internet you get to see other people's heroes run around in-game. They can also appear as back-up during fights, so you get to experience how other people have set up their heroes. The best part is how they've costumed these heroes though!

That's because the hero customisation is by far the most entertaining part of the game. Especially when combined with the aforementioned online-functionality. The game offers up a cornucopia of clothing, items, and accessories that you can place on your hero. Though the different face types are set masks that you can swap around, there's still a lot of options here. Almost all the accessories can be anchored to any limb as well as adjusted to your heart's content. The result is that we managed to create an amazingly stupid-looking and loveable hero.

So far, our favourite guest appearance is Flotation-Device-Man, who we encountered fairly early on. Basically, they wore nothing but floaties on their arms, legs, waist, and other body parts. If you're imagining the Michelin-man with orange stripes you're imagining right.

Yes, the game has its shortcomings. Most of those are in the combat, unfortunately. It all feels very stiff, and we found ourselves wanting for a bit more "flow". A cancel-system would've worked wonders, as we're constantly very committed to each input. Stunlocks are also a common occurrence, and that's not exactly the most fun one can have, especially if you're playing in VS-mode.

Maybe Spike Chunsoft could've copied a bit off of the Ultimate Ninja Storm series, because we feel that Cyber Connect 2 worked wonders by nailing the feel of the fighting from minute one. If we were to be bold we'd wish that Bandai Namco could introduce the two studios to each other.
So. There's not much to be said about this game when it comes to non-fan appeal. But for those of you who are (present company included), there's a lot of fun to be had if you're willing to ignore a couple of blemishes.

Advertisements
Gamereactor UK
+
Tons of fanservice, powerful create-a-hero mode, well-crafted RPG-elements.
-
Stiff action, some performance issues in free-roam, a lot of talking before you get to the meat of the game.
is our network score. What's yours? The network score is the average of every country's score

One Punch Man: A Hero Nobody Knows launch trailer is wild

Are you ready to watch idly by as Saitama beats all characters with a single blow for a minute and a half?

One Punch Man: A Hero Nobody Knows lands in February

Bandai Namco's game also has a new trailer, showing us once again how they're bringing the world of One Punch Man to life.

One Punch Man: A Hero Nobody Knows releasing in February

The upcoming Spike Chunsoft action fighting game One Punch Man: A Hero Nobody Knows hits PC, PlayStation 4 and Xbox One in February.

One Punch Man: A Hero Nobody Knows getting closed beta

This is coming next month, and we also have a brand new gameplay trailer to savour ahead of this beta.

One Punch Man: A Hero Nobody Knows gets Gamescom trailer

We also know of three more heroes joining the fight, as well as details on the Free Battle System. 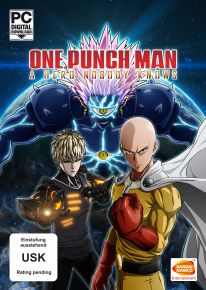