We can't say how long we've wanted to try a fighting game based on One Punch Man franchise. This has become a very popular universe due to its absurd humor (very common in Japanese fiction) to make fun of itself and everything that has to do with superheroes. Why is it that the protagonist is slightly less powerful than the villain, but happens to grow more powerful when the time comes to win?

Saitama is not like that. He does 100 abs, 100 push-ups, and 100 squats a day, plus running 10 kilometers. For all we know, that's enough to become the strongest man in the universe, as that's exactly what he is. Saitama defeats his enemies with only one punch, so all battles are fairly quick and not that fun. This isn't a spoiler though, as this is actually the series' premise. Having all of this in mind, we were rather sceptical about how Spike Chunsoft would design a fighting game in which you only need one punch to defeat everyone.

At Madrid Games Week we had the opportunity to play a short demo, and this is what we found out. One Punch Man: A Hero Nobody Knows will have a campaign mode where every player will create their own character, and your character asks Saitama if he can be our senpai, although he will probably say no. After that, you're let loose in an open-world to talk to villagers and accept missions, thus ranking up in the Hero Association's four classes.

We didn't play the campaign mode, but we were allowed to spend some time with the multiplayer portion, where you can fight against another player or the CPU. First of all, you have to choose your team of three fighters, then an arena, and finally you just have to punch everyone. You will win if you defeat all opponents, as expected, but if you decide to play as Saitama, you will have to wait a certain amount of time before he is ready to fight, as you always have to choose him as the third fighter. When the battle begins, a timer signals when he is going to make his triumphant entry, and in the meantime you'll have to wait and resist the other two characters.

If those fighters die, you lose, but if they don't, you will win for sure, since Saitama will defeat everyone with only one punch as soon as he enters the scene. At least, he defeated both characters that we had in the game demo (Tatsumaki, Mumen Rider, Bang, and Speed-o'-Sound Sonic all featured). So, at the end, you have two choices: you can try to survive 2v3 (or 2v2 if the rival chooses the great hero as well) and close with Saitama, or you can choose to be the fastest to defeat your enemies by choosing other three characters, with no Saitama.

The combat system is very simple. There is one special and one basic attack, and you can mix them to make (not too intricate) combos. There is also a jump button to make air combos, but we didn't really use it. You can also block, and the fights are very fast-paced. You spend a lot of time moving around the arena, and you can even make a running attack (we couldn't stop laughing when Mumen Rider ran over an enemy with his bike). Every character is different though, as Speed-o'-Sound Sonic sports a sword to slice everyone, while Tatsumaki has telekinetic powers, which were way difficult to control as we didn't get used to them.

We think the definitive element that can lead you to victory (or failure) is the power gauge. When you fully charge these bars you can perform special attacks or change to Super Killer attack mode, where your fighter will be covered by a special aura that improves all features for a couple of seconds, so you'd better be quick. This is so important that you can manually charge this gauge if you find the time to (Dragon Ball style).

What happens when two Saitamas clash though? One Punch Man's protagonist is not only the strongest, but also the toughest fighter. When he enters the fight, you can break your fingers trying to scratch him, however, his strength is higher than his defense, so if one Saitama attacks another Saitama, he will definitely make a mark. When fighting each other, their special and basic attacks won't do much, but when it comes to the Super Killer attack... that's another matter. The first one to launch this attack will be the winner.

After playing, we didn't know how to feel. Yes, they solved the balance problem about Saitama's strength, but the other characters didn't catch our eye. They have limited movements and felt a little clumsy and laggy, so we would love a little work to go into input response, since there is still time until game launches.

One Punch Man: A Hero Nobody Knows will launch for PC, PlayStation 4, and Xbox in 2020.

Lightning Max out now in One Punch Man: A Hero Nobody Knows

The new content lands as part of the latest DLC for Spike Chunsoft's actioner.

A live-action One Punch Man movie is in the works

Classic manga One Punch Man set to get a live-action film adaptation by Sony Pictures. Venom writers working on the project.

One Punch Man: A Hero Nobody Knows launch trailer is wild

Are you ready to watch idly by as Saitama beats all characters with a single blow for a minute and a half?

One Punch Man: A Hero Nobody Knows lands in February

Bandai Namco's game also has a new trailer, showing us once again how they're bringing the world of One Punch Man to life.

One Punch Man: A Hero Nobody Knows releasing in February

The upcoming Spike Chunsoft action fighting game One Punch Man: A Hero Nobody Knows hits PC, PlayStation 4 and Xbox One in February. 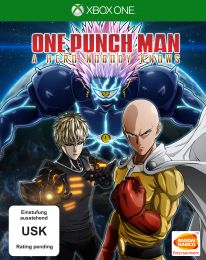