The Nintendo Switch game Mario Kart 8 Deluxe have been updated, and one of the changes made affects the animation where Inkling Girl displays excitement.

Before the update, she had here hand placed on the raised arm's bicep, which sends a different message in some places than what we're used to seeing from Nintendo. It basically means "up yours" or "f*ck you".

The Neogaf user Neiteio has posted comparing pictures of the gesture before and after the update. See them here:

The update also offer a range of other news, and these are (via NintendoLife):

• Opponents' names are displayed in the rear view mirror view in online matches.
• Invincibility period after a spin-out or crash is longer in online matches.
• Up to two players can spectate a friend group while they wait to join.
• "Worldwide" and "Regional" modes add players to Mirror and 200cc matches less often.
• Can now properly create a friend lobby when you have 100 or more friends.
• Inkling Girl's animation has been adjusted.
• Starting positions in online races now properly reflect the order in which players join.
• Driver Miis now properly showing facial expressions.
• Tournament clock now properly reflects real-world time.

"It's a near-perfect package that offers something for all ages to enjoy, with lashings of content to keep players coming back again and again."

Hori has announced a Mario Kart Racing Wheel for Switch

Looking to bring your Mario Kart racing to the next level with a steering wheel? Hori has your back.

Breath of the Wild lands on Mario Kart 8 on Switch

Smartphone app for Mario Kart is in development

We don't know exactly what it is though.

Look at the technical evolution of Mario Kart

This is to mark the 25th anniversary.

One can only hope for a real Rainbow Road. 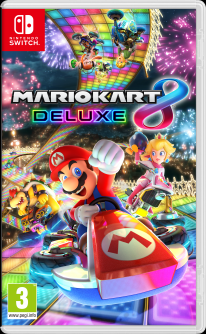