Despite its gritty and savage nature, the world of Oddworld delivers a warm nostalgic sensation to a lot of people. The series that has been around for almost 25 years created one of the most memorable characters in gaming, Abe, and the recent outing of Oddworld: New'n'Tasty (the remake of Oddworld: Abe's Oddysee) brought the wide-eyed, caring Mudokon back to life with some gorgeous modern graphics. Today, in 2021, we have the sequel to New'n'Tasty and the remake of Oddworld: Exoddus, Oddworld: Soulstorm and after spending a weekend exploring the continuation of Abe's journey on the PlayStation 5, we're unfortunately often left with a sour taste in our mouth.

Oddworld: Soulstorm picks up after New'n'Tasty and sees Abe and the free Mudokon people from Rupture Farms escaping the Glukkons once again. After momentarily finding solace in deep mines away from prying eyes, the Mudokons are found and put on the run once again. With a treacherous journey across vicious and dangerous lands before them, it is once again up to Abe to lead them and any other slave Mudokons to safety, but with the Glukkons and their terrifying machines hot on their heels, the journey won't be without loss.

Before we dive into the gameplay, it's worth mentioning that the storyline for Soulstorm is gripping from minute one to the end. As with other Oddworld games, Oddworld Inhabitants has done a great job of ensuring the storyline is engaging at every turn.

Built as a platformer, Oddworld: Soulstorm not only features stressful environmental challenges to cross, or more likely outrun, but it also features plenty of puzzling situations to solve. Whether that is brewing an antidote for some unfortunate Mudokon people or figuring out a way to get past some heavily armed Sligs (the strange looking enemies that will shoot Abe on sight), the gameplay requires you to use Abe's abilities and lootable items to your advantage.

For the most part, the platforming asks Abe to run, jump, crouch, and sneak his way over and past dangers. Pretty run of the mill gameplay really, that feels quite stiff most of the time. You do also have the ability to chant, which allows Abe to send a sort of spirit ball ahead to scout areas, hit gongs to unlock doors, or even possess Sligs, so that you can gun down other Sligs without getting your hands dirty, so to say.

The items on the other hand offer a variety of methods to utilise the environment. For example, this could be as simple as hurling a bottle of water at a spot of fire to douse the flames allowing Abe to cross, or alternatively could be to use some Soulstorm brew near a campfire to create an inferno of flames that will incinerate any living being unfortunate enough to be within its immediate radius. There are a lot of options at your disposal to be able to progress through this vicious world, and while you never have to resort to lethality (you can complete the entire game without taking or losing a life if you are really good), the methods are always available.

This conveniently brings us onto the difficulty of Oddworld: Soulstorm. The title itself is not a brutal game that is designed to raise your blood pressure, but the sluggish mechanics and very hazardous world will mean that you will die a lot. And, considering each time you die you return to a checkpoint that will probably mean you have to complete a chunk of a level again, it can be difficult to not become frustrated.

To keep the gameplay interesting, aside from just reaching the end of a level, there are a whole bunch of collectibles to discover and side objectives to conquer. From saving Mudokons to finding Royal Jelly, looting containers and looking through binoculars, each level is packed with goals that encourage exploration and replayability. Some of these challenges, such as finding the Royal Jelly will even increase Abe's health, so it's worth taking some time out to venture off the beaten path every now and then, even if it often feels like a chore.

For the most part, up until this point, it has been hard to pinpoint one exact area that Oddworld: Soulstorm truly excels in. It's platforming can be hard to love, and the items and abilities while interesting usually come second to just running or sneaking past something, but one area that does seem to stand out is the visuals - particularly the cinematics. Now, the game itself, for the most part, looks pretty good. When you are outside the environments are exciting and pretty gorgeous, when in caves and mines less so. But, the cinematics make us wonder why there's even gameplay in between. This game is marketed as a "big visual and cinematic leap" for the franchise and on this mark, it absolutely delivers.

Then there's the DualSense integration. On PS5, Soulstorm uses adaptive triggers and haptic feedback to heighten the sense of struggle when Abe is under threat, and it uses the controller's speakers to hum when Abe is chanting. Pulling these features together with the striking cinematics and the brutal yet gripping storyline, Oddworld: Soulstorm makes for a great narrative-centric experience, which is why it's such a shame that the game often feels tiring and discouraging to play.

Between the constant dying, sluggish controls, and boring side objectives, it's hard to feel encouraged to go back and replay parts of this game. Those who are fans of Oddworld and share a semblance of nostalgia for its universe will no doubt find enjoyment in what it offers, but newcomers, will find it difficult to dive in and experience one of the most beloved gaming series of all time with this video game. Sure, there are good aspects, great in fact, but following on from the success of New'n'Tasty, it's hard to see Oddworld: Soulstorm as an improvement to the series most of the time.

Advertisements
Gamereactor UK
+
Cinematics look great. DualSense integration is great. Narrative is a highlight.
-
Sluggish controls. Exploration is dull. Quality of the cinematics makes you wonder why there is gameplay in between sometimes.
is our network score. What's yours? The network score is the average of every country's score

Come and watch us save some Mudokons from the cruel Glukkons.

The game is set to launch on PC and PlayStation on April 6.

Oddworld: Soulstorm is coming to PlayStation consoles on April 6

The second game in Abe's heroic tale will also be available for PS5 PS Plus subscribers in April.

We also learned that the title will be a simultaneous release for both the PS4 and PS5.

Oddworld: Soulstorm is getting a physical version

New publishing deal announced ahead of the game's planned release on PC, PS4, and PS5.

The PS5's line up just got stronger as we got a proper look at the next entry in the Oddworld series. 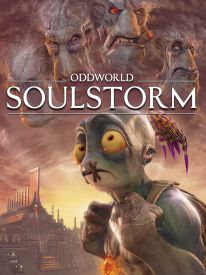