Just Add Water and Oddworld Inhabitants are speaking to Microsoft about the possibility of bringing Oddworld: New ‘n' Tasty to Xbox One, as well as the previously announced releases coming to PS3, PS4, PS Vita, PC and Wii U.

According to an exchange on Twitter, the studio are "still talking to Xbox. We shall see!"

When another hopeful user said that they hope to see them on Xbox Live after Microsoft's recent change of policy towards indies, Oddworld Inhabitants replied: "Just for clarity, they changed their policy only for Xbox One, not on any other platform :( We're still talking to them for X1!"

It was confirmed last month that New 'n' Tasty is heading to PlayStation formats next spring, with PC and Wii U versions set to follow afterwards. Hopefully we'll be able to add Xbox One to that long list of platforms.

The Mudokon with the pony tail and sewn shut mouth returns. Is it the remake the franchise deserves or are we in for a disappointment?

An audience with Oddworld's Lorne Lanning

We recently caught up with Oddworld Inhabitant co-founder Lorne Lanning who tells us how Abe was the original 99% and his thoughts on VR.

Oddworld: New'n'Tasty dated for Xbox One

First Oddworld title on Xbox in quite a while.

"We're having challenges with not having a hard disk," says Lanning.

Solid Snake actor will be playing Mudokon in Oddworld's reboot. 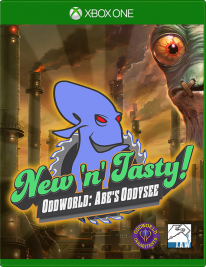