The fellas at Hello Games really put in a lot effort to their space survival No Man's Sky and always come up with some interesting ideas and surprises for their fans. For example, the latest expedition, Beachhead, asks players to figure out puzzles and find out what's hidden behind those encrypted goals.

Now that we've reached the end of the event, it's about time to reveal the surprise prepared by the developer. Just before the weekend, Hello Games announced that the legendary SSV Normandy SR1 from BioWare's Mass Effect has been added to the game for those who have solved the puzzles and completed the expedition.

If you haven't finished your task, worry not. As developer stated in the post, "all players now have until the 31st May to undertake this expedition for themselves if they wish to ultimately add the SSV Normandy SR1 to their frigate fleet for good".

No Man's Sky now has "Mostly Positive" reviews on Steam

After five years and plenty of updates, the game has a positive look on Steam.

It comes with a range of visual improvements.

It'll be sticking around until May 31.

Update 3.3 brings a new game mode to No Man's Sky

The Expeditions mode enables players to start off on the same planet together.

You can teach your new companions to complete actions such as scanning for resources. 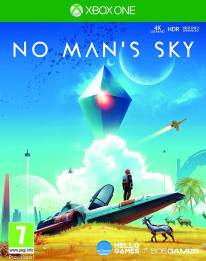