In a recent interview Three Fields Entertainment's Creative Director Alex Ward revealed that Dangerous Golf will not continue to evolve.

He explained that the game has not met sales expectations yet and so this leaves them in a difficult position when considering where to take it in the future. "We pooled our life savings to start our studio and to start making games. We're a 100 percent player-supported studio. Every copy sold directly supports our 11 person development team. The money goes to the people who actually make the game".

Regardless, this money isn't enough to keep putting more into Dangerous Golf. "We've always listened to feedback and our customers and we all take that really seriously. Whilst we'd love to be able to add more levels to the game—the reality is that we just can't afford to do so".

In the interview he also discussed the absence of replays, something which many people feel would be a good fit for a game about destruction. "Replays sound fun to everyone who hasn't had to spend time implementing them and testing them for a videogame".

In regards to the unsuccessful multiplayer, he said that "the constraint is that players are interacting with over 3500 dynamic objects in the Holes" and that "modern shooters mainly only network player positions of 24 people on consoles. Networking incredibly intensive physics simulations is a challenge for a massive development team—and even more so for a tiny indie like us. It is the same reason why games like Just Cause 3 don't have networked simulations. Throwing physics around online is incredibly tough".

A driving game may be on the horizon for the studio, but for now Dangerous Golf is not a part of that future. 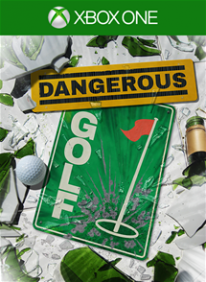