In the Souls community, Nioh doesn't have the best reputation, although Team Ninja was able to realise a lot of exciting ideas in its samurai-themed Soulslike. Ultimately, however, it was a game where people fought against people, at least that's how general producer Yosuke Hayashi put it when he recently held a presentation about how the second game has evolved from the first. With Nioh 2, Team Ninja wanted to shift the focus and, according to their own statements, create a more dynamic experience. Eight months ago, when we played the sequel's closed alpha, we would have challenged this assessment, however, after seeing the progress the studio has made with our own eyes last week, our impression of the game has somewhat changed.

Since our first look, a number of adjustments have been made, the most obvious of which is the third energy bar that you have to keep an eye on during combat. Hayashi-san clarified this addition, saying: "I think that someone who plays Nioh 2 exactly like the predecessor will have a hard time." What he means by this is that Team Ninja is putting its faith in the new 'yokai' skills that we as half-blood are able to master. The recently released story trailer explores the lore with a little more detail; we are a grotesque mix of human and demon, which is spun into arguments about political power in Feudal Japan during the time of the Warring States.

You unleash your yokai powers with the help of mystical soul cores that powerful enemies sometimes drop after combat. At in-game shrines, you can connect these cores to your 'spirit guardian'. If you played the first game you'll already know that these flashy spirit animals help you out with certain abilities or by providing passive benefits such as elemental resistance or attack boosts. In Nioh 2 they can also hold up to three cores, but you have to pay attention to the amount of energy needed for each of them because if the total of all three exceeds your guardian's spirit level, you won't be able to use all of them during battle.

The original Nioh, much like Sekiro: Shadows Die Twice did more recently, added a fundamentally important rhythm mechanic to its sword duels that had to be followed and internalised in order to master the combat system. In Nioh 2, your actions are still closely linked to the management of your endurance; strikes, parrying, and dodging uses up KI and if you're running out, you'll have to withdraw and regenerate. Those who take a breather with R1 right after a series of attacks collect any spent KI immediately, enabling them to continue to play aggressively. If you mess up the timing, however, you are defenceless in the face of your enemy.

This battle flow must be etched into your muscle memory otherwise you will suffer defeat. The combat system isn't really designed for hit and run strategies, though, so it's important to recover your momentum effectively. To give players an additional form of dominance over the battlefield, Nioh 2 now incorporates these yokai abilities in a way that lets us counter attacks regardless of our KI, even using high damage counter-attacks that can turn the momentum to our advantage - overall it's a move that should make Nioh 2 more accessible.

Unfortunately, we were not able to try the full version of the game this time and instead we were let loose on a solitary level. The structure of the map is based on the same setup found in the first game, so we found ourselves in fairly isolated areas, some of which can be explored vertically and contain a number of secrets. After being ambushed a few times, the mission took us to a boss fight and cutscenes that continued to braid the various narrative threads. How the game works apart from these missions and what other systems might come into play (such as an armoury or a dojo) is still not entirely clear.

So, what else does Nioh 2 have to offer? There is a giant, visually overhauled skill tree, wherein we can refine our skills with various weapon and magic types (called 'jutsus'). We can also assign unlocked skills to certain command slots and thus adapt our movement accordingly, just like we did in the first game. We also saw some great animations for the various attack combos; they seemed particularly ambitious, especially with regards to the large number of weapon types and how they are utilised.

The range of weapons seems to have increased as well, but we didn't even bother with the customisation aspect - we were playing somewhere in the latter half of the game and by this point, the inventory was a confusing mess. Again, loot plays a major role, although an overwhelming percentage of the equipment you find immediately gets thrown in the trash (there are other game systems based on the gear we recycle regularly). What's more, complete equipment sets give bonuses that will facilitate a range of different player builds. In the end, though, much will come down to how well Team Ninja manages the scaling of the late game - in the original they didn't exactly shine in this regard.

There's still a good five weeks until the game is released on PS4 and after this final preview event we've only licked a little bit of blood. Nioh 2 will probably remind a lot of people of the original (and Dark Souls too) since it's not a huge departure. At the same time, there are some significant innovations, especially the previously described yokai skills, which might be enough to bring even the most burned-out fans back into the fold. What we don't have to worry too much about is the overall quality of the game itself, because what Team Ninja delivers visually and mechanically seems to reach the same high standard set by the original. However, we are a little worried about the size and scope of the project; if the studio has iterated on too many systems at the same time, will this tangle of game mechanics and customisation options stand in the way of the action...? We'll find out in March. 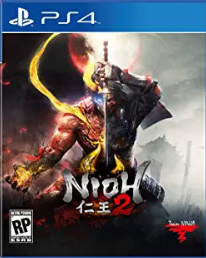