Yesterday, during Nintendo's Treehouse Live event, after showing off Pokémon GO for quite some time, Nintendo showed off their latest brand new IP. The game is called Ever Oasis, and sees the player in an Egyptian-styled land building and growing a prosperous oasis.

The game was created by the team who handled The Legend of Zelda: Majora's Mask 3D and Koichi Ishii, known for the Mana series. In the game you will need to go out into harsh puzzle-filled dungeons and meet with other tribes in order to ensure the growth of your oasis, taking on the Chaos, an enemy who threatens peace in the desert.

Ever Oasis looks like an interesting game, taking aspects from titles like Fantasy Life. It is slated for release some time next year.

"Especially in short bursts, it delivers an engaging mix of town management, exploration and RPG action." 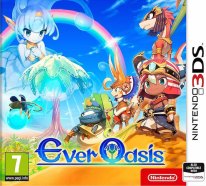