I think it's safe to say that Nintendo Labo probably didn't do as well as Nintendo hoped, but that hasn't stopped the creative company from taking the idea to another level.

Because Nintendo has revealed a new...game (?) called Game Builder Garage. This sounds like something similar to Roblox and Dreams, where we get to make our own games in fun and simple ways. This by using creatures called Nodon, each of which teach us everything from how to designate certain buttons to actions to designing levels and implementing sounds.

The trailer sure makes it seem simple by just connecting different nodes to each other and adjusting things in Super Mario Maker-like ways, but that doesn't mean the variety of games will be small. We're shown a game where you're playing tag with a friend in a single screen level, a racing game, a space shooter and more, so it'll be interesting to see what the creative minds out there can make. Speaking of which, you can also share your creations with others. This will also allow them to learn from you by seeing how your games are built.

Sound interesting? Then mark June 11 on your calendar, as Game Builder Garage will make its way to Nintendo Switch in just a month and five days.

No word on a price yet, however.

Do you think Super Mario Maker is cool? You ain't seen nothing yet. 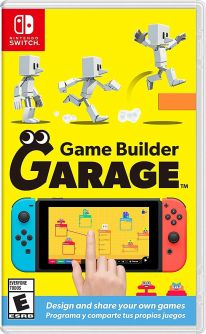