Nintendo's steadily rolling out its reconfigured Wii bundles, this time tossing in Mario Kart Wii and a Wii wheel along with a black version of the console.

The pack will release this Friday November 18th, though a price point has yet to be confirmed; though the new console build, which drops the Gamecube backwards compatibility, is expected to offer a lower price point to the current version of the machine as Nintendo restructure the Wii's position ahead of Wii U's launch next year.

Note that the pre-existing Mario Kart bundle retails for £109.99.

Every third Wii owner has it. 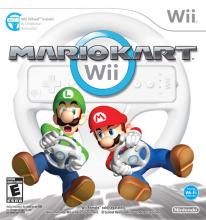