Ever since it launched on the Nintendo Switch last year, Ninjala has become a thriving success with it attracting millions of players and seeing many high-profile collaborations. With the game being out a full year now, many people have likely wondered whether it will continue to remain a Switch exclusive or make its way over to different platforms such as the PS4 and Xbox One.

In an interview with GamesBeat, GungHo president Kazuki Morishita was asked whether the free-to-play game would arrive on other systems and he said: "We don't want to restrict the game to one platform, but to be honest, Ninjala goes really well with the Nintendo Switch. I don't think that expanding to other platforms is a bad idea, but currently Ninjala has a lot of drive from Nintendo behind it, and we think the Switch is the most suitable platform at the moment."

This is a pretty interesting response, as it appears that Kazuki realises the potential of bringing the game to other devices. Ninjala on other platforms might not be coming in the immediate future, but at least the idea hasn't been completely ruled out.

This latest season's theme is horror.

Ninjala's developers don't want to "restrict" the game to the Switch

They have noted though that the platform is a great fit.

Ninjala celebrates its first anniversary with collaboration with Demon Slayer: Kimetsu no Yaiba

A roadmap for season 6 has also been shared.

And GungHo Online is offering some free rewards to celebrate the milestone.

One of the biggest additions is a new Online Tournament mode. 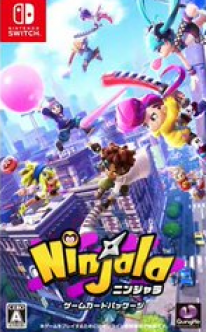