A wise man once said: "The most common criticism made against Ninety-Nine Nights is that it's repetitive. That's like criticising nuggets for tasting like chicken." I tend to agree, but then Ninety-Nine Nights II is evidence that there is such a thing as too many nuggets. And these nuggets are rotten. I write this review sick to my stomach from playing one of the worst gaming experiences this fall has to offer.

You play as the suitably macho warrior Galen. Galen finds himself with his two giant (overcompensating?) knives in a "cool land far away" to defeat a great evil. During your journey with Galen you will unlock more playable characters, upgrade your abilities, meet NPC's with an abundant supply of vowels in their names and grow very bored.

The basic premise of the game is to partake in massive battles where you face "ONE MILLION TROOPS!". Translated from the language of hype this means you cut down an endless supply of enemies with the efficiency of a harvester. Every now and then you collect colourful orbs, and you can also scream "by the power of Grayskull" or equivalent and launch an area attack to kill off a few more enemies.

Think of Dynasty Warriors or the first Ninety-Nine Nights, with all the strategic elements removed and replaced with more mindless button mashing. I wonder how the discussion sounded like when the plans for this sequel were made. Scary thought.

What this amounts to is that Ninety-Nine Nights II is an incredibly shallow game. There is absolutely no sense of development, and you grow bored after just ten minutes of harvesting enemies. After this the game feels more like a chore than entertainment. The battles start and end with the same frenetic whirlwinds of violence against the enemy tides. Even if the game is very challenging at points, the greatest challenge lies in not succumbing to sleep.

The enemies seem to know they are destined to be chopped down, and seldom even try to attack you. Most of the time they fill the battlefield like giant ants waiting in line to be chopped down. At other times the enemies go completely nuts and attached themselves like leeches to you. It is as the director Tak Fuji (an internet celebrity these days) sits hidden behind my couch with an on/off switch for the artificial intelligence.

In between levels are boss fights, and between levels and bosses you buy upgrades for your weapons while you think about turning your console off. It would be the most prudent thing to do. It's sad to see developers fail this badly when they are treading a proven ground. One would think that killing all these enemies would be fun. It's like making tacos that tastes badly. There are one or two good moments, but the ability to make a soldier shish kebab out of your enemies does little to balance the rest of the crap up.

From a presentation standpoint things aren't much better. The animations and character models are very detailed, but when countless synchronised soldiers run across the screen the framerate crawls to a halt. Unforgivable in a game such as this one. Instead of epic blood baths we are treated to a strobe like and jerky spectacle. The design of the characters is also horrific, and they seem to be some kind of crossbreed of medieval space marines and anime-goth.

The soundscape is a little better. Mostly due to the fact that the soundtrack is so forgettable that it adds nothing. To be honest there are a few compentent voice actors in the cutscenes, it's just a shame to it adds nothing to the cliché riddled and uninspired script. The story is as thin as rice paper and comes across as pure filler in between the mindless nugget like violence.

Ninety-Nine Nights II is simply put a game that manages to be worse than its predecessor in every conceivable way. It's as if the developers knew this and tagged on an online mode to at least bring something new to the table on paper. You can play this mode with a friend and face hordes of enemies in even more identical corridors. The online mode fails at achieving anything more than appearing even more pointless than the actual campaign.

What have we learned from Ninety-Nine Nights II? Well, there is entertaining violence and meaningless violence and this game belongs to the latter category. I wouldn't even recommend this game to hardcore fans of the predecessor. Do yourself a favour and watch Konami's press conference from E3 this summer. That's as much entertainment as you will get out of Tak Fuji. 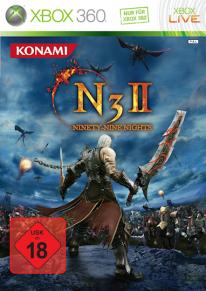