In one corner was Quake, the true sequel to Doom, leading the charge on the new era of FPS. In another was Mario, as Nintendo's icon redefined platforming with his N64 debut.

The third was Nights: Into Dreams. Something new, unique. Yet one ill-concieved sequel aside, its impact on the games industry started and ended here. Its legacy was relegated to "cult classic".

That's partly due to releasing in the darkening shadow of the dominant competition (PSOne would conquer that generation's console wars), but also in part because magazines had a hell of a time hammering home what Nights actually was.

It's the same today. Surface level, it's a cute, colourful game about two kids overcoming their nightmares with the help of a flying jester called Nights. It's bright and fun and has music you'll catch yourself humming at odd moments. All the hallmarks of a 'proper' Sonic Team game, back when the studio's name meant something.

It's also incredibly easy to complete. Sure, you can download it's 2GB form onto your HD, play it and finish it in an afternoon. The game's seven levels - three specific to each child, and a shared fourth - fly by.

But as much as Outrun was never about just crossing the finish line, or a side-scrolling shooter was about seeing the end credits, Nights isn't about the story's conclusion. It's about high-scores and chaining links, mastering precision runs.

It's a crossover between a racer and a score-attack title, but framed through a wholly unique play style.

Each world has four courses. While the stages are completely 3D, Nights flies through them on a 2D plane, following a predetermined route that crisscrosses back and forth through the map. Each course is filled with collectable orbs, stars and multiple hoops laid out in increasingly complex patterns.

So, surface level: kid arrives in a world, and is immediately set upon by Nightmarens, who extract and steal four emotional energies (called Ideyas) and lock them in cages (labelled Captures) throughout the world - one for each course.

Freeing a nearby imprisoned Nights, you then need to collect twenty blue orbs dotted through each course to free Ideya from each Capture, which usually require multiple laps around each course before you've collected enough. Finish all four courses and you're transported to a boss stage for that world.

Racing rules: you've a set time to complete each course. Clock runs down and you're separated from Nights and forced to trek across the world on foot to complete the course. The kids are constantly chased by a ticking alarm clock that'll awaken them (and end the level) if it catches up.

While theoretically you could just collect orbs playing as the kids, you won't want to. Because control of Nights is a complete joy.

The game's the only one in history to capture what you'd believe (or dream) flight to feel like. Combining directional movements with trigger presses allows you to perform aerial aerobatics. Press A and you'll launch into a dash move, while performing loop-de-loops will form whirlpools that'll drag an nearby collectables to Nights. Both are essential in maintaining Links.

Chaining Links comes from continuously collecting orbs, stars and punching through hoops without a break (the game's got a nearly non-existent timer for gaps between one link to the next). All are strewn in rough racing lines through each course, so learning their location and path is key to building Links, and with them high-scores.

This doesn't really come into play until you've destroyed a Capture with the default twenty blue orbs. At which point the course transfers into bonus time. Collectables turn gold, and whatever seconds you have left on the clock can be, should be - will be - spent racking up as many near-perfect laps as you can to increase high-score and your leader-board ranking before time runs out.

As a result boss fights take a whole new dimension, as quicker completions give higher multiplier bonuses to your current world score, the final decider in whether you soar or crash into the leader-boards. In these new digital re-releases, online rankings are in, your social life is out.

Given the shortness of the stages of around ten minutes, the game channels that "one more go" mentality, and you'll be seeing racing lines in your sleep. Despite being as colourful as a Disney cartoon, Nights has a fiendishly arcade-style addiction lurking just under its skin.

Oh, and it also has an entirely missable but incredibly diverting A-Life ecosystem built into each of the worlds. Nightopians, winged cherubs that'll you'll race by as Nights, live in each world. You can kill them - accidentally or otherwise - by pulling them into a loop-de-loop.

Try and avoid that though, and soon the blighters will respond positively to your presence - playing music as you go by, and laying eggs which you can hatch with either kid or Nights if you find them, further populating the level.

Bundling in a limited edition Christmas version of the game (near-impossible to find when first released in the 90s), plus the original 4:3 version, widescreen support for the new version, as well as a host of unlockables, you'd be looking at a pretty perfect game.

Well...almost. There's an issue that'll only effect players familiar with the original, and even that is currently open for debate as to its validity. The Saturn original had a special analog stick controller released alongside it - less stick and more curved ball, allowing for complete precision in Nights's movements. Something vital given the split-second reactions needed for hitting chains perfectly in later courses.

In the HD remake, the controls don't feel as smooth. There's ongoing arguments as to whether control here is eight-way digital rather than analog, that the sticks don't quite match the analog nub, or if nostalgia's just blurring the reality of sixteen years ago.

Either way, those who have clocked through the original will find it harder to maintain straight lines or hit loops with the HD version - an adjustment that you'll soon make though. If this is your first time with Nights, you won't notice any issue at all.

And given the majority will likely have never played this, it's fantastic that this hasn't been relegated to the halls of gaming history. Dusted off and given the proper Sega repackage treatment, this is more than a curio, and something you'd only ever see appear on the indie scene today. Nights stands the test of time and even now, sixteen years later, is still as original and unique as it was on its first release. For the right type of gamer, this is definitely worth picking up.

Advertisements
Gamereactor UK
+
+ Addictive gameplay + Play style is unique and has a real charm.
-
- Christmas Nights is missing some of the content of the original.
is our network score. What's yours? The network score is the average of every country's score

REVIEW. Written by Gillen McAllister on the 5th of October 2012 at 15

"Nights stands the test of time and even now, sixteen years later, is still as original and unique as it was on its first release."

Nights HD given price and date

Due out early October.

Sega's announced Sonic Team's classic is returning with an HD remake due this autumn: come inside to see the first screens and watch the announcement trailer. 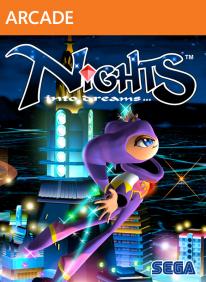