Replaying old games is not an easy task. Originality can withstand the ravages of time only to a certain extent, and modern comfort functions are very effective in killing nostalgia. Because of Nier: Automata's immense success, Square Enix has commissioned Toylogic (under the watchful eyes of the original creators) to reissue the original Nier in the new "version upgrade" Nier Replicant ver.1.22474487139. While one can hardly deny that this is an old game at its core, it might very well end up being the game I enjoyed playing the most the year. That is, because the developer provided us with enough good reasons to not only justify experiencing this unspeakably sad game once again (or for the first time), but also because Toylogic's work is fleshing out this unique adventure in parts that the original missed out.

At first glance, the main storyline seems straightforward and somewhat redundant because it is overall reminiscent to a classic hero's journey (although at the same time, it isn't). At the centre of this adventure stands a self-sacrificing young man who is willing to do anything to free his sister from a mysterious illness called "Black Scrawl." To cure her, he eventually allies himself with a magical spellbook, whose power grows as it defeats mighty "Shadows" - monsters that inhabit this cruel world.

The predecessor of the astonishing Nier: Automata follows the first Drakengard; a mix of dreary hack'n'slash action and aerial combat on the back of a dragon. This series is known for its disturbing stories, and Nier uses the same approach: It tries to mislead you only to ram a dagger in your heart at the right moment. On this journey you will meet characters who have seen unimaginable suffering. Even knowing this, it is hard to bear the depths into which this tragic plot unfolds.

In terms of game mechanics, Nier is (luckily) much shallower. In this classic action-adventure we visit different locations, enter linear dungeons along the way and kill shadowy monsters whenever the chance arises. There isn't too much variability in terms of opponents or environments and this is also reflected in the side activities and the generic quest design. Oftentimes we take on dull gathering missions only to find ourselves running through way too large, rather empty areas in search for something. In order to hide this, the original creators put some emphasis into elaborate changes of perspective in certain locations, which ascertain the boundaries to other genres.

In ver.1.22474487139, Toylogic introduces some welcome modernisations to the original game structure so that you can more easily (re-)experience the clever story. Apart from the obvious graphical improvements, which turn the not exactly nice looking original into a much more attractive game, extensive adjustments to the combat system stand out in particular. The possibility to focus the camera is certainly the most helpful of these additions, as it enables counterattacks and evasive maneuvers, while allowing sword blows to hit their target more frequently. In addition, we can now fight much more acrobatically in the air and fluidy flow magical attacks into attack chains.

The composition has been rearranged too, which above all ensures that the wonderful background music is brought to the forefront more often. Apart from that, I would like to highlight the English voice actress Laura Bailey, who does a fantastic job in her leading role. The constant discussions between her character Kainé and Grimoire Weiss (brought to life by Liam O'Brien) have been excellently set to enliven the game in many areas. The other speakers also offer great portrayals, as each character is able to shine in one or more strong appearances. The English voiceover doesn't have to hide behind the Japanese synchronisation, and all the while version 1.22 is offering a good amount of additional voiceover than were unvoiced in the original game from 2010. However, there are still some sections that are being 'visualised' in a sparse text adventure style, which are primarily aimed towards bookworms.

Putting the presentation aside, it is still fairly obvious that Nier stagnates relatively quickly from a gameplay perspective. After accessing all three weapon types and the adult forms of Grimoire Weiss' magic, the game is somewhat stepping on the spot and this won't change until the very end of your journey. In the later parts of the story you will fight reinforced variants of the same monsters, spend a lot of time looking for rare materials and maybe extend your playtime with different kinds of side activities. Apart from the functional re-presentation, the tragic plot remains the selling point of Nier Replicant ver.1.22474487139 and that will ultimately determine how much you will enjoy the game.

The first Nier is not an extensive role-playing game, but it also does not end as soon as you see the credits at around the 20 hour mark. You are asked to repeat a big chunk of the program in order to experience new aspects of the story or access additional game content. Nier's first cycle is very different from the adventure that unfolds before you on your second or even the third attempt. Once you've seen Ending A insightful recaps and memories shed light on hidden traits and themes that were only hinted at up until this point. This also includes completely new sections that were not even part of the original.

I would like to highlight an additional quest that made its way into the second half of the game. What begins as another inconspicuous errand leads to a brilliant confrontation that literally casts a long shadow. Apart from this, the second 'playthrough' opens up the DLC "The World of Recycled Vessel", which has been revamped with a very eccentric, audio-visual note (and a few more surprises). You can also look forward to some cosmetic customisation options that we don't want to spoil for you.

You don't necessarily have to play the game up to this point, because you get a self-contained story if you drop out after seeing the credits for the first time. However, you will miss out on background information and subtleties that add to this uniquely sorrowful world. Admittedly, some surprises require prior knowledge because they tie in to other works made by Yoko Taro. If you like the developer's earlier games or 'just' fell in love with Nier: Automata, you should definitely hang out until you see the new ending for yourself, because it brings all these games much closer together.

Nier Replicant ver.1.22474487139 positions itself effectively between a modern remaster and a full-scaled remake. Much has been done in terms of the technical presentation, from which the updated combat system and its modern adaptations benefits in particular. Fans will love the additional story details and the new ending of the game, which fits in well into the dark universe that mastermind Yoko Taro is known for. However, the basic game structure was not addressed in this production and that brings a lot of legacy issues from long-forgotten days to light. Like most of the things the Japanese author is fidgeting with, those shortcomings will eventually sink into misery in which Taro-san hides the painful truth of his grand stories. Just beware, to not lose yourself to that sweet despair.

Gamereactor UK
+
Modern combat adaptations are based on Nier: Automata, new story sections are meaningfully integrated, updated presentation makes it easier to get started.
-
Redundant game structure, requires significant investment by the players, signs of the times are visible in many places.
is our network score. What's yours? The network score is the average of every country's score

And Nier Replicant only launched in April.

Despite this, it sold 50% less copies than Automata.

The ad doesn't offer any gameplay but does show off a combination of live action and CGI. 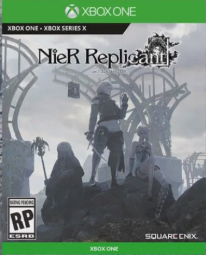