If you have either a PlayStation 4 or an Xbox One, there isn't a huge range of good kart racers to choose from. Hopefully Nickelodeon Kart Racers can fill that void as it has now been announced by GameMill and Nickelodeon.

The game features "iconic Nickelodeon animated characters from SpongeBob SquarePants, Teenage Mutant Ninja Turtles, Rugrats, Hey Arnold" and we are promised 24 tracks to race on. There will be local multiplayer for up to four people and by winning races you will be able to get parts to improve the various karts.

Nickelodeon Kart Racers will be released on October 23 for PlayStation 4, Switch and Xbox One. Below are the first screenshots showing off the game.

"The tracks are shiny, polished and offer a ton of colour in an otherwise thoroughly uninteresting experience."

SpongeBob and friends are getting ready to race.

Online
ActionJackson on the 26th of July 2018 at 20:33.
This is gonna be better than Cod plops IIIIand this should sell 429million units, if its a good kart racer (like All star fruits) then every household should have a copy I reckon 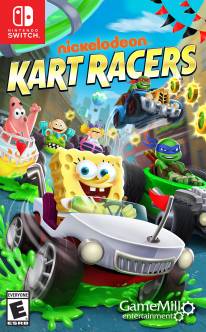