Ni no Kuni II: Revenant Kingdom has been in the works for a while now, having been delayed just a little bit longer only recently, but we still got to play more of the game when we visited Bandai Namco's Winter Showcase in Paris last week, including two levels we had tried before in our previous preview as well as two new ones.

The first level we dived into (which you can watch above) saw us take part in a Battle for the Heartlands - as the level was called - and this was a somewhat more tactical affair than we've previously played in Level-5's RPG. In a heavily-tutorialised section, we were guided through how to use the adorable mini-army of soldiers we were given, who circled around the protagonist Evan as we worked to reclaim the land from our enemies. On the one side we had our melee forces, and on the other we had our archers, which is a pretty good combo for taking to the battlefield if you ask us. When we say mini-army, we mean just a few little soldiers in a group, all of which are controlled in real time.

We were surprised by just how simple it was to command these forces, as you don't so much command them as rotate them. Different buttons have different attack commands for example, such as all-out attack, but the positioning was far more important. By using the triggers we could rotate our forces depending on where they were needed, and although we're not exactly strategic masterminds we had the good sense to keep our archers at the back of us at all times, while our melee units were facing towards the enemies. If you rush in and really kick things off, there's a chance that all the units can squish into one incoherent mess, but for the most part these two clusters of soldiers just stay at opposites sides to one another, moving when they're told to.

What we also had explained to us is that there's a rock-paper-scissors system in play, where certain units are effective against one kind but also vulnerable against another (you know how it goes). The game helpfully points things out by colour coding each unit clearly on-screen, and also by highlighting who has the advantage, a blue arrow meaning you have the advantage against a unit, with a red arrow meaning they have the upper hand against you. This sounds confusing, but considering there were only ever a handful of groups of enemies on screen at any one time, it was pretty useful in keeping us safe.

There are also special tactics for you to use as well, which help spice things up and keep them entertaining. Chingis's special attack is an airstrike, for instance, while Khunbish's is more for support, as it can heal all allies when you're in a spot of bother. Shock tactics can also be used by pressing circle (we played on PS4), and these make you invincible for a short period of time, with unstoppable attacking power to boot.

One last thing we learned while playing is that the scenery is often important, whether it be raining down arrows from the high ground or bottlenecking enemies in a valley. Although we didn't get enough time to really toy around with this element of the game, we bet this will be something that appeals to strategy fans out there. Using all of the abilities and elements together is vital, as we discovered in this rather simple section, although we can imagine things will get tougher as the game progresses. With such simple and accessible strategic options, though, we look forward to getting stuck in again.

The second level we saw, called One Good Turn Deserves Another (which you can watch below), required us to rescue our friend from the Wyverns' Den, and the first thing we noticed is just how good the environment looked. The dry, rocky world popped with colour, and much like when we played earlier sections like the boss fight with Longfang and the Trial of Courage, the whole thing was incredibly vibrant and shiny, not to mention detailed too.

It isn't quite open world, but the sections we played were open enough to explore and find secrets should you so wish. When we were in the den itself and the starting area, for example, these were relatively focused on combat in which we played as the normal-sized Evan, but once we stepped into the open space between the two we turned into mini Evan for the purposes of exploration (much like we'd seen alongside the armies in the Heartlands), and we could scour the surfaces for guilders - the currency - or other loot indicated by glimmers on the ground.

The reason this exploration element is quite important to mention is because the last two levels we've played have both been two different set pieces against larger enemies, so it's nice to see that this isn't all that we'll be doing in Ni no Kuni II. In fact, it seems as though there's a lot of exploration for those who want it, but at the same time those who want to clobber enemies can do just that by going the direct route, clearly marked on our minimap. For example, we didn't want to get too caught up in non-essential fights, so we darted past all the enemies straight to the den, but there were plenty of other branching pathways to sniff around if we had wanted to.

Once we got into the Wyverns' Den we had to defeat not only the Wyvern Warlord but also all of his cronies to rescue our buddy, which involved the combat we've talked about in our previous preview. We won't go into too much depth here, but in short Evan has different abilities that he can use, both in offensive and support, but he can also interact with the colourful little higgledies to help in battle as well. When the green higgledies make themselves available, for example, you can activate them for a healing boost, and using these tiny creatures alongside your own abilities and attacks can make a battle much easier.

All in all much of this last level had stuff we'd already seen demonstrated in previous demo levels, including the combat and special abilities, but it was nice to get more of a taste of the wider world around these encounters. It was especially nice, however, to get a first glimpse of the Battle of the Hearthlands and how you can control armies. Indeed, since Evan is a king there's a lot of strategy that we'll be using in the full game, with battles being only one part of this, but it's great to see that the controls are accessible and easy to use while still offering depth via this rock-paper-scissors system. We're excited to get stuck into Ni no Kuni II again, and see if these promising levels can all work together to form a satisfying whole. 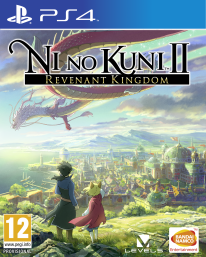