It was initially expected that we'd see the game launch in May, but now it turns out that we'll get the latest iteration of Natsume's long-running farming series in June, when the title finally makes it to consoles. Harvest Moon: Light of Hope landed on PC via Steam back in November 2017, and now it's ready for its console debut on Nintendo Switch and PS4, this time with the "Special Edition" subtitle.

It'll release both digitally and physically, and you'll be able to spot in on store shelves by looking out for the just-unveiled box art shown below. The game can be pre-ordered, but publisher Rising Star hasn't specified yet what it is that makes this version of the game more special when compared to the PC original (if anything), and the official bullet points remain pretty much the same as before:


Are you excited by the return of the long-running farming RPG to console? Let us know in the comments down below.

"Besides a blunt story, Light of Hope does at least have some classic Harvest Moon gameplay."

Next Harvest Moon getting Switch and PS4 Special Edition

Light of Hope Special Edition will release physically and digitally in June.

The next entry in the popular farming sim arrives later this year. 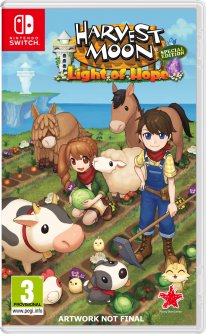