The sequel to Bloodrayne is called Bloodrayne: Betrayal and will be released as a digital download on both Xbox Live and Playstation Network. The 2D hack'n'slash is bound to feature a lot of blood, and today we've received some new screenshots from the game - and a release date. Bloodrayne: Betrayal should be available for purchase on August 30.

New pictures and a release date. 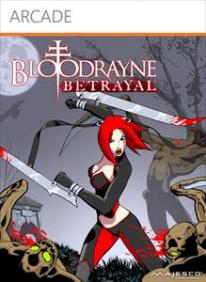